Venom is a boss and subsequently a playable character in Marvel Ultimate Alliance: Doom's Reckoning.

Eddie Brock bonded to the Venom Symbiote after it was discarded by Spider-Man, and they became one of his fiercest enemies; Venom. He was eventually recruited by Doctor Doom to join the Cabal, with the promise that he would finally get to kill Spider-Man. However, after a confrontation with the Ultimate Alliance at Oscorp, Venom was convinced to join the heroes and stop the Cabal from unraveling all of reality. 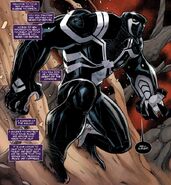 Sleeper
Add a photo to this gallery
Retrieved from "https://marvelcomicsfanon.fandom.com/wiki/Edward_Brock_(Earth-6110)?oldid=252640"
Community content is available under CC-BY-SA unless otherwise noted.