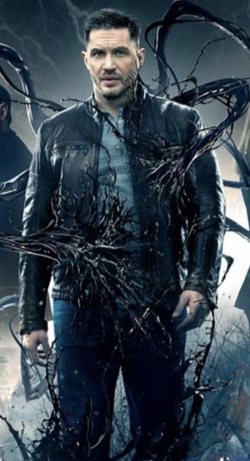 I can't deal with this anymore... I miss the power... I need the power.

Eddie Brock became a journalist working for the Daily Bugle because of his desire to prove that Spider-Man is a criminal. His hatred later led to him becoming bonded to the Venom Symbiote after it was rejected by Spider-Man. They then became one of his fiercest enemies, dead set on killing him.

After Apocalypse rose to power, Venom was captured by his forces. The symbiote was forcibly removed from Brock, and it managed to escape capture. Eddie, however, was imprisoned in the Sphinx Death Camp where he began suffering from withdrawal.

He no longer even cared that Spider-Man was dead. All he wanted back was his power. He ignored Black Widow's attempt at a revolution because he felt too powerless to fight back. This accept of his defeat stayed with him all the way to his death in a Terrigenesis Chamber, where he was exposed to the Mists and died due to lacking Inhuman DNA.

Retrieved from "https://marvelcomicsfanon.fandom.com/wiki/Edward_Brock,_Jr._(Earth-9999)?oldid=245988"
Community content is available under CC-BY-SA unless otherwise noted.