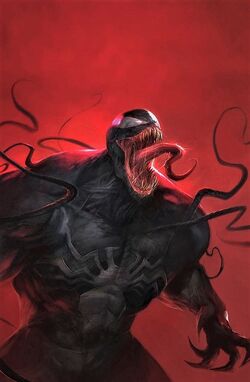 As a child, Edward Charles Allan Brock, Jr. was raised as a Roman Catholic in suburban San Francisco. His father was cold and unloving towards him because he blamed Eddie for his wife's death during childbirth. Eddie constantly attempted to obtain his father's approval, who was always secretly busy with his bio-engineering related-experiments, though even after excelling in school, he only received half-hearted encouragements. Eddie often stole from other children, just so he could "find" these items to gain their friendship. He also suffered from extreme bullying as a child.

In his teenage years he gained entrance to E.S.U.'s journalism program by fabricating an internship, and he romanced the law student Anne Weying, with whom he would later officially date. Though exceptional in athletics, Brock switched his major in college to journalism after reading an article on the Watergate Scandal. Upon graduating, he moved to New York City, and as a member of the Associated Press, he obtained a job as a journalist for the Daily Globe. He proved to be highly talented, though even this did not get his father's approval and his importance as a son was slowly forgotten by the latter as time passes by.

Frustrated and disappointed by how his father behaved to him for the rest of his life ever since he was still a child, Eddie decided to finally leave his arrogant and despicable father in San Francisco and moved on to his own so-called "better life," now living with his girlfriend's apartment in Manhattan.

After months of fulfilling his lifetime career as a succeeding journalist, Brock finally wanted to break a big story, and thought he had found this story when he was accidentally and unintentionally contacted by Emil Gregg, a crazy conspiracy-theorist who claimed to be close to knowing several vigilantes' and criminals' secret identities throughout New York City, including the city's friendly neighborhood Spider-Man, a city-renowned superhero that Eddie and the Daily Globe has always been looking forward to write an article about. Having this rare opportunity in his hands at the last second, Eddie agreed to secretly meet with Emil and help him learn the true secret identity of the Spider at the cost of the man's own request, which was the amount of $1,500.

To avoid this great opportunity of his from passing, Eddie risked the financial status of the Daily Globe by paying Gregg the amount of $1,500 without his superiors knowing about his agenda. After paying Gregg the $1,500, the two finally began their deep investigation on the web-slinger's secret identity. On their first step, Eddie was given the order by Gregg to take several photos of the Spider on several different cases and situations, to which Eddie did, not only to help the lunatic succeed in his secret plan to expose all secret identities, but also to help himself and the Daily Globe to get back on its competition with the Daily Bugle, now that he'll be able to offer a great article coming up.

The Birth of Venom

Some time after Eddie's life took these drastic changes, and overwhelmed by his shame and the knowledge of his impending downfall as a once-successful journalist, he began contemplating suicide. He decided to visit Our Lady of Saints Church to beg forgiveness from God for this mortal sin before he decided on doing it. Once inside the church, he was caught by surprise when the symbiotic alien costume, which had earlier been discarded by Spider-Man in the church's bell tower, attacked and bonded with him, drawn by his despair, adrenaline, and fierce hate, on which it fed. The symbiote bonded mentally and physically to Brock, whose rage and hatred toward Spider-Man further corrupted it, causing it to become increasingly vicious and bloodthirsty.

Sensing his emotional pain for the past few weeks, it felt a similar pain and hatred for Spider-Man emanating from Brock. Although his body had been honed to near-perfection, Brock’s mind was reduced to an all-consuming vessel of hatred and recklessness. It was this fierce emotion that attracted the emphatic parasite. In order to survive, the alien costume had to feed off the nearest and greatest source of emotion, and also flesh of it's prey as another source of energy. The symbiote joined mentally and physically with Brock, whose emotions overwhelmed the already confused alien. The dominant thought on both their minds was that of Spider-Man. But Brock’s sheer hatred for the crime fighter twisted the symbiote's feelings to a similar extent.

In effect, Brock’s emotions drove the symbiote insane, just as their bonding may have driven Brock over the edge. Brock soon discovered that the costume gave him all the powers of Spider-Man, and more. It also added bulk to his already large frame and increased his strength to superhuman levels. Calling himself "Venom", Brock directed the costume to sprout a hideous grin and plotted his revenge. Through the costume, Venom learned a great deal about Spider-Man, including his secret identity. Due to his series of actions on trying to desperately hunt the web-slinger down on countless different occasions, the ravenous and bloodthirsty Venom would become one most formidable and ferocious foes that Spider-Man have encountered throughout the years of his entire crime-fighting career.

Embarking on a citywide killing spree, the malevolent symbiotic villain Carnage was confronted by Spider-Man. However, the wall-crawler's amazing arachnid-like abilities were insufficient to subdue the thrice-strong serial killer. Spider-Man was forced to enlist the aid of the heroic Fantastic Four in order to defeat the villain and try to separate Cletus from the organic suit. But despite being defeated, Cletus never wanted to separate himself from the host and neither did the symbiote, as the two had an mutual, inseparable bond.

As a result, the battle eventually ended with Carnage escaping his foes due to defeat, finding its way down the sewers of New York. Following Carnage's escape, Spider-Man vows to immediately confront Carnage once they met again, and with the help of the Fantastic Four's Mister Fantastic, they decided to study a fragment of the symbiote left on the scene of the battle, so they would also use it as a tool to eventually track the symbiote itself, while Cletus was still at large as for the time being.

He also sought the assistance of another, far more dangerous ally, in the form of Venom himself, the father of the Carnage symbiote, which would also eventually become one of his most-despised foes later on. According to Brock himself, he only came to agree to help the web-slinger and the heroes since the Venom symbiote was also "having a bad feeling" after witnessing the presence of Carnage in the news, aware that it had given birth to a far more dangerous monster than it already was.

But even though Venom despised its offspring even more, it agreed to help as a price of killing the Spider by themselves. Later, Cletus was betrayed by Venom (Cletus was pretty much unaware that it was all part of Brock's plan all along), who unwillingly sought out on Spider-Man, Fantastic Four, and his fellow villain and former cellmate, Ulysses Klaue for their help in order to take down an unstoppable Carnage from mutating into something much, much worse.

In his days during the global conflict of superhumans known as the Ultimate War, Eddie was observably not present at the entire week of clashing between heroes and villains, deciding not to participate with the rest of the Spider-Man's rogues gallery who had willingly joined the great terror that is the Movement Alliance in their open opportunity against the friendly neighborhood web-slinger. However, when Spider-Man and his allies were seen escaping the New York sewers, Eddie and the Venom symbiote was seen hiding as he watched the redeemed Blackie Drago brutally die at the hands of the mutated Green Goblin, accompanied by the Sinister Six.

Believing for that the man truly redeemed himself in his last of moments, Eddie finds respect in Drago for doing what he thought was the right thing by sacrificing himself and fighting against Osborn and his sinister allies, even if that have gotten him killed in the very end. After seeing the villains leave Drago's lifeless body, Eddie tried to approach in an attempt of paying respects to the fallen anti-hero, only to find himself getting attacked by a mysterious yellow and reddish-colored alien organism similar to his own symbiote.

Eddie defended himself and through Venom (who apparently knew the other symbiote), had considered slaughtering the symbiote, right until Eddie senses that the symbiote was also being mutually controlled by a host, just like him. Eddie did his best to talk some sense in the host, but both Venom and the other symbiote was just too aggressive against each other, leaving him with no other choice but to beat it into submission. The two then clashed, only for the opponent to have the upper advantage against Eddie in combat.

However, at that moment, Venom suddenly went into a fit of berserk, momentarily defeating his newfound enemy. Finding his opponent weakened, Venom was tempted to kill the villain by absorbing the symbiote into his own, simply claiming that he had been waiting for a very long time to do it. Unfortunate for Venom, the anti-hero was finally knocked down by someone else, revealing to be another symbiotic-wearing individual wielding a miniaturized flamethrower. Now unconscious, Venom was carried by two of his mysterious opponents to an unspecified location, with Eddie only hearing one of the captors saying "laboratory" and "The Foundation."

As Eddie was being held captive by the mysterious symbiotes he had suddenly encountered.

Venom Symbiote: The alien costume, which had grafted itself to the nervous system of Eddie Brock, somehow absorbed the powers of Spider-Man during its brief symbiotic relationship with him. These powers had been transferred to Brock, so long as he wore the costume, and combined with Eddie's natural bulk made Venom physically stronger than Spider-Man. The symbiote also kept Brock's cancer in check until they separated. Ultimately the costume's influence hurt more than helped Brock's psyche, and when he finally realized this himself he decided to auction it. Several years later, Eddie reclaimed it, becoming Venom once more. The symbiote grants Eddie the following powers:

Retrieved from "https://marvelcomicsfanon.fandom.com/wiki/Edward_Brock,_Jr._(Earth-61615)?oldid=259042"
Community content is available under CC-BY-SA unless otherwise noted.