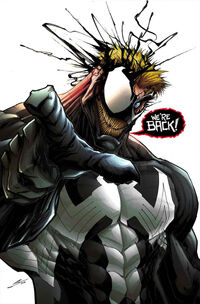 The Carnage Symbiote? You managed to bond with it?!

-- Eddie Brock reacting to Christopher bonding with the Wrath symbiote.

Edward "Eddie" Allen Brock was born and raised to a Roman Catholic family. Eddie's father was unfortunately unloving to him because of his mother dying of birth complications during her pregnancy with Eddie. Even though his dad resented him, he attempted to get his father's respect by doing good in school, which resulted in him getting only half-hearten encouragements. However, when he was outside, he was struck by a car, resulting in his dad becoming broke in order to pay his medical bills, causing his relationship with his dad to be more tarnished more. This led to Eddie Brock become a petty thief, mainly stealing his friend's stuff to become his "friends." This also was contributed by bullying due to the fact they always bullied Brock for being the smart one in his school.

Years Later, he gotten into a ESU of Journalism program to learn how to become a journalist. After graduating, he managed to get a job to at the Daily Globe and proved himself to be talented.

Downfall and Introduction to Venom

When the villain, Sin-Eater, was on the news. Eddie Brock decided to go after Sin-Eater to reveal his identity in order to get the serial killer arrested. This is when he captures a man named Emil Gregg, he ends up falsely accusing Emil for the crime. Afterwards, he is mocked by the press after Peter Parker got the real Sin-Eater killed by the S.W.A.T., causing him to quit and blame Peter for his failure. This later causes him to grow a vendetta against Peter and becomes hateful towards him.

Couple of Nights Later, he was under a clock bell. As he looks up, the Venom symbiote attaches to Eddie Brock. Causing him to become the villain, Venom. During this time, he manages to fight against Spider-Man after finding out he was Peter Parker and attempts to attack him in revenge.

After months of Spider-Man and Venom fighting, Eddie was arrested after being separated from the Venom symbiote. Unknown to Eddie, the Venom symbiote was pregnant and was looking for Eddie. During his time, his cell mate was Cletus Cassidy, a serial killer who murdered a whole orphanage after being mental abused in it. One day, Cletus and Brock gotten into an altercation which resulted in Cletus accidently cutting himself with a screwdriver. This is when the Venom symbiote found Eddie Brock and birth out a baby symbiote. Both of the symbiotes bonded with Eddie and Cletus, causing them to be released from prison after teaming up. During this time, Eddie continued his terror on Spider-Man but also being in altercations with Carnage due to both attempting to kill Spider-Man.

After his years of Vigilante Justice, he was taken in by S.H.I.E.L.D. and became Agent-Venom. Going on mission to save people along with Agent-Venom II and Spider-Man.

Retrieved from "https://marvelcomicsfanon.fandom.com/wiki/Eddie_Brock_(Earth-7777)?oldid=248511"
Community content is available under CC-BY-SA unless otherwise noted.