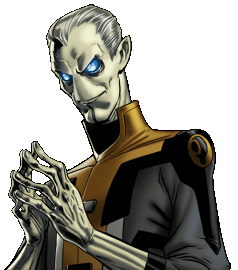 Hear me and rejoice. You have had the privilege of being saved by the great Titan. You may think this is suffering, no. It is salvation. The universal scale tips toward balance because of your sacrifice. Smile. For even in death, you have become children of Thanos.

Persuasion: As a whisperer, Ebony Maw's true talents rely on his almost supernatural persuasive abilities. He is able to take hold of a person's thought process and make them serve his own goals with nothing but his words. Even the strongest minds have fallen prey to his machinations.

Super-Genius Class Intelligence: Ebony Maw mostly demonstrates his intelligence with his highly skilled abilities of manipulation, being described as a "black tongue that spreads mischief and evil wherever he goes."

Equipment: Ebony Maw seemingly has access to a variety of alien technologies, including a class one defense shield he wore to protect himself from Thane's destructive powers.
Transportation: None known.
Weapons: None known.

Retrieved from "https://marvelcomicsfanon.fandom.com/wiki/Ebony_Maw_(Earth-1010)?oldid=212901"
Community content is available under CC-BY-SA unless otherwise noted.