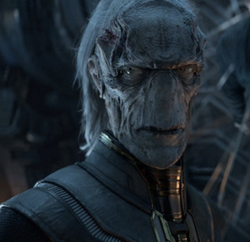 The Priest of Eternity
Identity

Hear me and rejoice. You have had the privilege of being saved by the Great Titan. You may think this is suffering, no. It is salvation. The universal scale tips toward balance because of your sacrifice. Smile, for even in death you have becoming children of Thanos.

Ebony Maw was born in the Dark Dimension, where he quickly mastered the Dark Arts, killing his parents and escaping to the physical world. He eventually found himself working as a group of pirates alongside Corvus Glaive and Cull Obsidian.

The three of them went on to be recruited by Thanos to join the Black Order. Maw fell in love with Thanos's methods of bringing balance to the universe, reveling in the bloodshed. Maw became several dedicated to the Black Order, rising up to become the Priest of the Universal Church of Truth, a subset of the Black Order based out of Sanctuary II.

Maw and the Black Order would later stage a raid on Wakanda when they recovered the Power Stone in an attempt to claim it for Thanos. The Black Order suffered several losses in the battle, but Maw was able to escape with the Stone. However, the Avengers Iron Man and Doctor Strange were able to sneak aboard his Q-Ship.

Maw was able to gain the advantage over Doctor Strange and enjoyed torturing him before Iron Man was able to blow a hole in the ship. Maw was sucked out and froze to death in the vacuum of space, while his ship was commandeered so that the Avengers could return to Earth.

Retrieved from "https://marvelcomicsfanon.fandom.com/wiki/Ebony_Maw_(Earth-101)?oldid=248241"
Community content is available under CC-BY-SA unless otherwise noted.