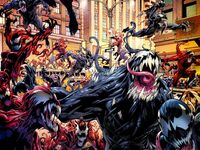 Earth-7777 or known as The Great Symbiote Civil War was a reality that took place before the events of "WRATH".

In this reality, a war happened that resulted in Venom and Spider-Man teaming up to stop Carnage. At the end of the war, Carnage was killed by the combined powers of Spiderman and Venom, resulting in Carnage's minions to go back to their planet and Venom and Spiderman going their separate ways.

Before the Civil War

Retrieved from "https://marvelcomicsfanon.fandom.com/wiki/Earth-7777?oldid=226650"
Community content is available under CC-BY-SA unless otherwise noted.