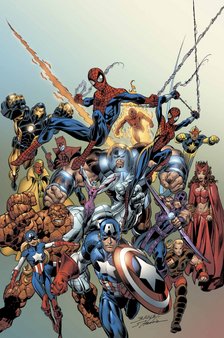 Earth-6169 is a reality created by Sabilsadat. It is a mix of 2099, MC2, and mainstream, with elements not belonging to any of them. The history of this universe can be divided into three parts; a past (616), a present (MC2 or 982) and a future (928 or 2099). The "MC2" period is much different than the original, as certain events (such as One More Day, World War Hulk, Dying Wish etc.) did not occur in the past. This universe mainly centers around the "MC2" period, as many changes happen to the world during this period, including the end of the Heroic Age.

Hydra works a lot like the real world conspiracy theories of the Illuminati. While the division of Hydra which Captain America and the Avengers face regularly exist, another branch of Hydra has been working behind the scenes manipulating the world's events. Various political leaders, media personnel etc. are members of Hydra. They have been using the media to hide the truth and fabricate facts. Their goal is to control the world from the inside. For example, the so called "War on Terror" and U.S invasions in Middle Eastern countries weren't to fight terrorism (as the terrorist groups such as Al-Qaeda, Taliban and ISIS themselves are off-shoots of Hydra), but rather to steal important artifacts and capture the many super-humans in those countries. When Steve Rogers was Director of SHIELD, he uncovered all this and revealed Hydra's plot to the world. Once this happened, chaos erupted and the media, economy all went still for a few hours. Though Hydra was defeated by the Avengers, there remained a huge impact on the world. Some years later, Parker Industries and SHIELD would take initiative to help those who have suffered due to Hydra's secret activities, mostly the people of the war-torn countries of the Middle East.

This universe bears many similarities to other universes, but has many bizarre changes of its own, including altered historical events. Examples are as follows:

Retrieved from "https://marvelcomicsfanon.fandom.com/wiki/Earth-6169?oldid=147080"
Community content is available under CC-BY-SA unless otherwise noted.