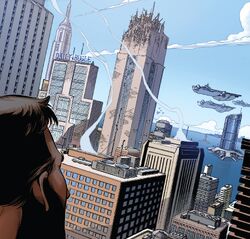 Earth-61616, often known as the Resistant Universe (formerly known as the Dark Age Universe), is a divergent and a dystopian future reality of the Modern Universe (Earth-61615) in which most of the heroes and villains of this earth either have died during and after the events of Ultron Revolution, causing for a large ripple effect to occur throughout the entire timeline. Consequences include several heroes and villains to be forced into retirement (causing their children or other heroes to take their mantles), or continues their career as superheroes, but will be hunted and will be considered as outlaws, known as "The Resistance." This reality is also ruled by an tyrant organization known as H.A.M.M.E.R. (in the guise of S.H.I.E.L.D.'s and the previous government's new replacement), the new reincarnated system of Hydra founded by Tony Stark's delusional son, Edward Stark, who established a new world order in society.

This reality had almost pretty much the same timeline with its mainstream counterpart, however, throughout this reality's entire history, came along with both several major and minor alterations, setbacks, and drastic changes, due to the "ripple effect," caused by Thanos using the Infinity Gauntlet into accidentally creating this reality, during the events of the mainstream reality's Infinity War, both due to Thanos and Adam Warlock's reality-altering snaps.

This reality was eventually destroyed during the following incursions in the Secret Wars event. But not all characters in this universe died and some characters had eventually been displaced in the mainstream universe, the reality of Earth-61615. However, since the Beyonder had rebuilt the Multiverse following Sinnu Sarrum's fall and the destruction of Battleworld, the Dark Age Universe was eventually brought back to existence, although it was revealed to be ruled by the mystical Nightmare, who decided to claim it as his new realm since its inhabitants were said to be "good as dead," as the survivors have been displaced to the mainstream reality, while those who didn't survive were merely prevented by being resurrected due to Nightmare's festering presence in their universe.

Thankfully, with the combined strength of the mainstream reality's Doctor Strange, Fantastic Four, and the displaced New Avengers who joined for the battle of their home, they were eventually able to banish Nightmare out of existence into the multiversal realm of Heaven, where he had to spend eternity under the love and welcoming embrace of the benevolent Unified Cosmos. Having dealt with the conquering Nightmare, the alliance assisted the Beyonder as they rebuilt this universe back to the habitable and lively home it was meant to be, along with a few modifications to compensate the painful decades its denizens had gone through starting from Ultron Revolution until now, where some things can change for the better. The Dark Age Universe was merely the past, for now it is reborn as the Resistant Universe.

Retrieved from "https://marvelcomicsfanon.fandom.com/wiki/Earth-61616?oldid=268821"
Community content is available under CC-BY-SA unless otherwise noted.