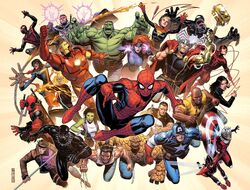 Earth-61615, also known as the Modern Universe (known in-universe as the Earth Prime, Prime Earth, or Prime Universe), is the core and central reality which serves as the mainstream universe in the Marvelous Multiverse, an alternate version of the Marvel Multiverse made by MarvelousMarty.

Ends of the Earth