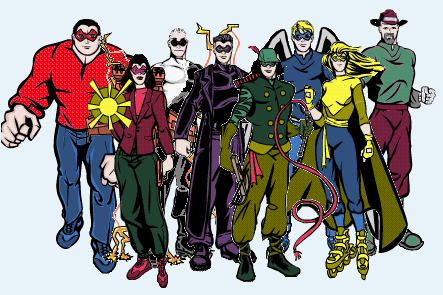 Earth 49996 is very similar to Earth 616 (the mainstream Marvel Universe) with the following exceptions:

1. No events have ever occured that could threaten the entire Earth or the entire universe and no such events could ever occur. There are two characters, Medira (Earth 49996) and The Young Magistrate (Earth 49996), that are powerful enough and invested enough in the fate of Earth 49996 that they quickly deal with any threat of that magnitude. The only threats and conflicts that occur on Earth 49996 are localized threats such as threats to a city or a neighborhood or an individual, because only these threats are small enough that they might not attract the attention of Medira or The Young Magistrate.

2. This Earth is far more science fiction centered than Earth 616. Although there is magic, there isn't enough magic for any characters to be sorcerers or wizards. Likewise, there is almost nothing supernatural in this universe: no Doctor Strange, no Limbo, no Asgard, no Thor, no Hercules, and no personifications of abstract ideas.

This universe was created by me (bejjinks) for two primary reasons. First, this is a universe where I can tell the stories I've been coming up with. Second, because I prefer stories where the threat is more localized and personal. I'd rather read about Peter Parker and Mary Jane than read about Doctor Strange versus Death.

I welcome contributions from others who also want to write or read stories where the storylines are more localized and personal.

Retrieved from "https://marvelcomicsfanon.fandom.com/wiki/Earth-49996?oldid=53111"
Community content is available under CC-BY-SA unless otherwise noted.