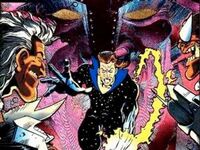 Earth-45828.1, also known as Razorline+, is an alternate universe based directly off of Clive Barker's Razorline universe. It features its own versions of Barker's super-heroic characters, as well as most of the super-villains within the original Razorline comic series. However, Razorline+ differs from the original in that The Watcher exists as one of Earth's main super-heroes, albeit with anti-heroic behaviors.

In terms of history and prehistory, Razorline+ shares almost all of the features of our world. However, it has a wider variety of supernatural and extraterrestrial events taking place within the known history of the Earth. In any case, most of the known historical events of our reality have their own particular versions within the reality of Razorline+.

The universe itself went through a similar evolutionary history to that of ours, but is said to be fashioned (only indirectly) by the One-Above-All (OAA). It is believed by many people on the Earth of Razorline+ that an extra-dimensional race of beings known as the Celestials were commissioned by the OAA to "fine-tune" everything into existence. Such fine-tuning was commanded in order for the universe to be permissible for life, especially intelligent life.

Retrieved from "https://marvelcomicsfanon.fandom.com/wiki/Earth-45828.1?oldid=254148"
Community content is available under CC-BY-SA unless otherwise noted.