Home of the Hulk (Steven Rogers) 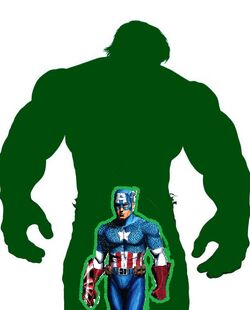 He is my monster. He has great power, and he's my responsibility.

Earth-2536 is the home reality of the Hulk (Steven Rogers). In this reality, Steve Rogers attended the gamma bomb display to attempt to dissuade Banner from using it. He attempted to use his shield to break the bomb, but it instead released concentrated gamma rays onto him, turning him into a hulking, green monster. General Ross formed a team known as the Ultimates to attempt to recapture Rogers, but they ended up forming up a crime-fighting group known as the Avengers after teaming up with the Hulk. He then formed a new team of Ultimates led by himself to destroy the Hulk.

The Hulk would later be taken during Cap-Verse.

Retrieved from "https://marvelcomicsfanon.fandom.com/wiki/Earth-2536?oldid=84310"
Community content is available under CC-BY-SA unless otherwise noted.