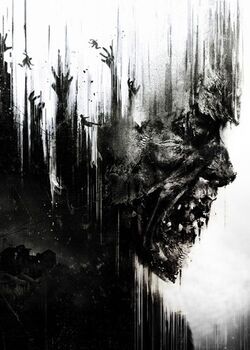 Presumably a divergent reality of Earth-61615, the reality known as Earth-21410 was the reality in which the wrathful abstract entity known as Nightmare faces off against the mystical heroes of Earth, led by Doctor Strange along with the assistance of Iron Man, in a cataclysmic interdimensional stand-off, which ended with the unfortunate creation and evolution of a cosmic plague of unorthodox origin, dubbed as the Nightmare's Dream, that further spread and infected the world in the process, turning the affected population into insane, ravenous, and malevolent zombie-like creatures which are greatly motivated into spreading the plague into the benevolent as the fearful and lethal symptoms tears them apart, slowly and painfully, until they decay and subsequently die from it while the plague itself takes it time to evolve and mutate to survive in its exposed environment.

Since has plagued the entire world with the Festering Sickness for the next two years even after Patient Zero's defeat, the survivors unexpectedly somehow encountered a several signals from the Negative Zone, encouraging the surviving superpowered individuals to embark one last mission to open up a portal to the Negative Zone on an Earth that is now overrun with the Festering Dreamers. The survivors continue the charge to save what was left of humanity with this mission, and in the end, a grand hope had come in the form of young adults Franklin and Valeria Richards who miraculously came to Earth from the plane of the Negative Zone, fulfilling their late parents' promises to cure the remaining populace from the mystical pathogen and help lead the remaining world to a brand new start.

However, by the moment they realized just how much of the greater universe was also festered with the Sickness that was brought upon by their infected cosmic allies, the heroes would have to make a choice: to take whatever or whoever they could save in the Negative Zone and restart a new life there, leaving the their home, or to fight for it until the very end. Nevertheless, the remaining heroes and villains had to make the choice of evacuating half of the remaining population back into the Negative Zone once they found out the incoming arrival of the Cosmic Carrier and his armies of darkness, setting their course on Earth aiming to finish what they have started.

Retrieved from "https://marvelcomicsfanon.fandom.com/wiki/Earth-21410?oldid=268852"
Community content is available under CC-BY-SA unless otherwise noted.