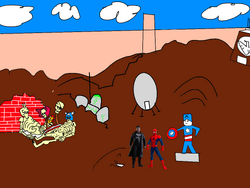 During the evolution of humanity, the human gene eventually died out, leaving extraterrestrials to populate the Earth. After a million years, the Beyonder started kidnapping heroes from various universes, starting with Earth-609 and Earth-981 to force their heroes to fight each other. Later, he was defeated by the Avengers from Earth-981 and from Earth-609.

Retrieved from "https://marvelcomicsfanon.fandom.com/wiki/Earth-17351?oldid=236665"
Community content is available under CC-BY-SA unless otherwise noted.