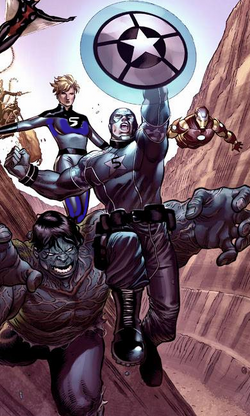 My home is pretty normal, I guess I'm the only difference.

On this world, Captain America was thawed out by (and joined) the Fantastic Four. Without his encouragement, the Avengers would disband, and eventually lead to an Ultron armageddon accidentally caused by Henry Pym. The Banished were sent to this world to reform the Avengers, and ultimately, they succeeded.

Captain America would later be taken during Cap-Verse.

Retrieved from "https://marvelcomicsfanon.fandom.com/wiki/Earth-16451?oldid=85628"
Community content is available under CC-BY-SA unless otherwise noted.