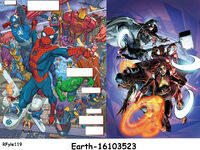 Home reality for Blake "William" Parker from Spider-Man: Into the Spider-Verse.

This earth was visited by the Web Warriors, recruiting Blake to help them fight Morlun and the Inheritors.

This reality is based of teen Spidey (Spider-Man's) life, but its Blake's life.

This universe is mostly based off Ultimate Spider-Man and Earth-1610 basically, but also includes some elements from:

Retrieved from "https://marvelcomicsfanon.fandom.com/wiki/Earth-16103523?oldid=268769"
Community content is available under CC-BY-SA unless otherwise noted.