Start a Wiki
Welcome to Marvel Comics Fanon Wiki`s most successful, most developed, and largest communal project to date! 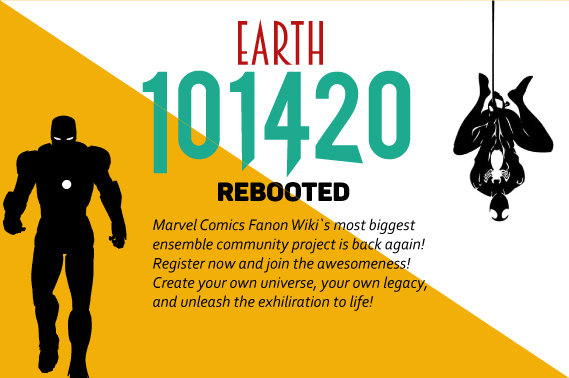 The 101420 Universe The internet`s biggest fanon ensemble community that is free for all!
Created by: DuttPanda, Vision0; Monitored by: BeholdtheVision,DuttPanda,Vision0

Earth-101420 is a communal ensemble collaboration project, created by DuttPanda and Vision0, spanning over ten fanon live action television series. After the universe became horribly inactive, everything was rebooted from square one, starting everything again. This has now become Earth-101420 Prime.

This is a communal fanon organization dedicated to housing multiple intersecting fanonite non-profits live action television series, occurring within the same timeline. All of the materials within the universe is fictitious and is not intended to be work of reality, and therefore, is not to be taken seriously. Neutrality about this project is positively encouraged. Feedback is at the utmost, needed.

For newcomers, Nick Fury will guide them through the S.H.I.E.L.D Administrative and Communal Divisions Board, where they will be congregated and introduced to pivotal and necessary rules, policies and licenses!

This universe is currently monitored by Dutt, Vision0 and BeholdTheVision. Although Finn Tracy has rights as well, he is not affiliated with it, as he are involved in other projects that are ongoing and unfinished. To distribute knowledge and have a general discussion amongst the members, Behold has opened a spot for a general discussion area, go to The 101420 Cafeteria.

If any user wants to create their own reality, use the Spinwheel of Fortune to find out your luck! The Spinwheel of Fortune supplies aliases of superheroes, of which you will make your show based on. However, for instance, if you get a show that you do not like in the wheel, then you can inquire to the administrators of this organization about why you do not like this and what show would you like to do. If the administrators accept your ideas, then you will be granted as a member! But make sure to pick out something that`s not already chosen!

To learn about general, recent or breaking news/information, based on this universe, head over to The Daily Bugle Central where Mr. J. Jonah Jameson will walk you through new resources and materials!

To learn more about your favorite superheroes and characters and know about them, visit the Hall Of Fame!

To know about customization and default templates for our universe, visit S.H.I.E.L.D Technology Database!

This is the general news and information enrichment area that is pivotal to the whole of the universe.

All series take place within the same timeline, however, certain events may be altered or manipulated. See also:

Disclaimer: After a detailed discussion and a cross revision, DuttPanda and Vision0 have decided to close all entries for the ones who want to enter this universe until Year One (Completion of Season One of all the current shows) ends. Entries reopen in Year Two, possibly.

Guardians Of The Galaxy

After a few months of inactivity, founders Vision0 and DuttPanda chose to revive their universe. BeholdtheVision kickstarted this new movement, and decided to take on spearheading this movement with a new Spider-Man series cowritten with DuttPanda. DuttPanda took on the Avengers also, while Draft227 announced Fantastic Four and Jaga 321, Thor. BeholdtheVision announced a Guardians of the Galxy series soon after, along with his departure from Spider-Man for creative reasons. Soon after, it was announced that BeholdtheVision would be carrying over cancelled ideas from Spider-Man to an X-Men show with Draft227 and Uncanny X-Factor. Black Knight by FrenchTouch and Spider-Woman and Elektra by Actingoutlove were announced around the same time.

With 9 shows planned, BeholdtheVision stated that only one more show would likely be announced for now. "We have to focus on quality over quantity", he said. "We're going to try out these shows and see what works and what doesn't before going further." A Black Panther series by DuttPanda was also announced, followed by Iron Man. Later, Melody The Movement and Red Average joined the universe to monitor television series of Avengers Academy and Hawkeye respectively. Currently, Vision0, Jaga 321 and Shadow 757 are on the works of developing a Defenders television show.

In the chat, Cartoon44, a Wiki administrator was enrolled in this wiki to do a Captain America project.

And later, sadly, Jaga 321 had confirmed he cannot do the Defenders series, leaving it in the hands of Shadow 757 and Vision0.

Elektra: Curse Of The Hand

Captain America
Add a photo to this gallery

The Defenders
Add a photo to this gallery

Thank you for voting!

Earth 101420 is a rebooted universe. Everything that used to be in the universe is now situated here:

(please add you're own work if not here)

Start a Discussion Discussions about Earth-101420