E.T. is the sixth episode of Marvel's Young Avengers.

-The Scarlet Witch and Quicksilver… They’ve gone missing.- Patriot looked up at his friends, clearly worried.

-They took Steve…- Natasha Romanoff spoke through her intercommunicator.

As Wiccan flew towards the two archers, a rainbow ray absorbed him, teleporting him out of Earth.

-Well… I think I will have to ask some contacts I have… Friends in high places, you could say.- Teddy looked at his teammates.

Hulkling walked towards the Playground’s secret entrance and put his palm against the seemingly normal wall. However, a panel appeared underneath his hand and a door opened next to him. As he walked inside, he was greeted by Director Coulson.

-Teddy, welcome!- He smiled, looking up slightly at the Kree-Skrull Hybrid.

-Well, you’re on the Index.- He shrugged. -Bad times to visit, actually.- The Director of S.H.I.E.L.D. shook his head. -Simmons has gone missing, and apparently Ward is back in the HYDRA van. Hunter is looking for Agent Morse… And we are really glad we made an alliance with Gonzales’ faction. I don’t know what we would do without Agent Weaver.- He smiled as the woman walked by him and positioned herself by the Monolith, examining it with Mack and Fitz.

-Sounds like a lot, indeed.- The teenager scratched the back of his head. -But I was looking for Agent Nekhene.-

-Oh, yes, sure!- Coulson nodded. -Skye,- he pointed at the Inhuman. -Take him to Nekhene’s room.-

-Yes, A.C.- She nodded and waited for the teenager to follow her.

-So…- Teddy bit his bottom lip as they walked. -I heard you earned powers…-

-Yes, apparently I’m an Inhuman… Whatever that means. And I thought my dad, Cal, was the bad one, but oh hell no, my mom was the real baddie.-

-I don’t know much about the Inhumans… Even though they are a ramification of half of my species. You see, I’m half Kree.-

-He’s a Kree we met… He wasn’t very friendly towards me.-

-I was raised on Earth by a Skrull, so don’t worry. I won’t do anything to you.-

-The only one who actually kept that promise is my dad. And he’s a psychopath.-

-Anyway, here we are.- Skye nodded at the door.

-I actually like that codename!- She chuckled as the Young Avenger walked inside the room.

-Likewise! What are you doing here?-

-Billy has gone missing… A rainbow ray, as Kate described it, teleported him away…-

-Of course, hang on.- He got on his device and pressed what looked like random buttons.

Some minutes later, a spaceship landed next to the S.H.I.E.L.D. base, where Nekhene, Teddy, Skye and Coulson were waiting.

-Get on the ship, now!- Phyla-Vell ordered. -We’re being followed.-

-Skye, go with them. They may need your powers.- The Director ordered, and the Inhuman got on the ship after them.

-Who is this?- The female Kree asked, looking at Quake.

-This is Daisy Johnson, an Inhuman…-

Genis-Vell turned around suddenly and walked towards the S.H.I.E.L.D. Agent.

-An Inhuman… And you are not on Attilan?-

-What is that?- Skye asked, scrunching her face.

-Attilan is where the Inhuman Royal Family resides. Black Bolt and Medusa, the King and Queen.-

-Never heard about them…- Daisy shook her head slightly.

-She’s new to this…- Nekhene looked up at his boyfriend.

-Wait… If you two are here… Who is piloting this ship?-

-Come here, Dorrek.- A voice said, and Teddy walked to the cockpit.

-Hello… I am very sorry I have not been around the last sixteen years, it has not been easy for me either. I am a fugitive of the law, actually. That is why we are being followed.-

-Ronan’s assistant, Wah-Keen… Now that the former betrayed the Kree, he hopes that the Supreme Intelligence will make him Supreme Accuser.-

-Basically, he wants to be the head of the Kree police.- Genis explained.

-And why are you an outlaw?-

-I was sent to Earth to create a link with the humans so the Supreme Intelligence could invade the humans… But I could not do it. Carol and the Avengers mean too much to me.-

Suddenly a missile hit the ship, making Mar-Vell lose control for a moment.

-Phyla, Genis, get on the lateral firearms, NOW!-

The Kree did so and started firing back, damaging the enemy ship.

-Vin-Tak…- Wah-Keen looked down at the Kree next to him. -Get on their ship.-

-Yes, Accuser.- He nodded and got to the top of the vehicle, before leaping on Mar-Vell’s ship.

-Vin-Tak’s on the roof.- Captain Mar-Vell said. -Someone go get him off!-

-Vin-Tak? Oh… I know him… But I thought Sif had erased his memory.- Skye muttered.

Teddy grabbed her by her waist and got her on the top of the ship. Hulkling and Quake started fighting Vin-Tak, as Genis and Phyla were firing against Wah-Keen’s ship.

-Don’t let him hit you with his truncheon, otherwise you’ll lose your memory!- Daisy mentioned, punching the Kree.

-Thanks for the advice!- Dorrek VIII said, barely evading the alien weapon.

-I hit the critical spot!- Martyr exclaimed, laughing, as the Accuser Corp’s ship started to descend.

Wah-Keen got off the ship and jumped on the heroes’, joining Vin-Tak in his fight.

-Skye… I think this got a bit out of hand…- Teddy mentioned.

-Just do it!- Hulkling cried out, and Quake pushed the two Kree off the ship using her vibration manipulation powers.

Once they had dropped Nekhene and Skye in the Playground, the Vell took Hulkling back to New York. Atop a building, after Teddy had said goodbye to his half-siblings, he hugged his father tightly.

-I am sorry I have been the most terrible father ever… I am really sorry. It is just… Not easy. I need to solve my stuff with the Kree Empire… And I hate that this is affecting you. I cannot ask you to leave your boyfriend, your friends… Just to go with me. But hopefully, I will be able to move here permanently soon. Just give me more time.-

Teddy nodded. -It’s ok… It’s ok, I understand… I will be here when those problems vanish… And honestly, I wasn’t expecting to see you here…-

-When Genis told me you wanted to talk to them, I decided to come along too.-

-Oh, yeah! About that… Billy was teleported away by a rainbow ray… What could that be?-

-That’s definitely the Bifrost Bridge… Your boyfriend was taken to Asgard.-

-Where have you been, Teddy?!- Wiccan exclaimed, running to his boyfriend.

-To find some answers… But honestly… I got something I never expected.- He smiled, looking at his father.

Somewhere in the US, Wah-Keen stood up.

-Inhumans… We need to inform the Supreme Intelligence, this is worse than we thought.-

Hulkling at the Playground

"Skye, take him to Nekhene’s room."

"An Inhuman… And you are not on Attilan?" 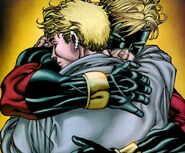 "I am sorry I have been the most terrible father ever…" 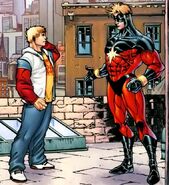 "It’s ok… It’s ok, I understand… I will be here when those problems vanish… And honestly, I wasn’t expecting to see you here…"
Add a photo to this gallery

Retrieved from "https://marvelcomicsfanon.fandom.com/wiki/E.T._(YA)?oldid=149438"
Community content is available under CC-BY-SA unless otherwise noted.