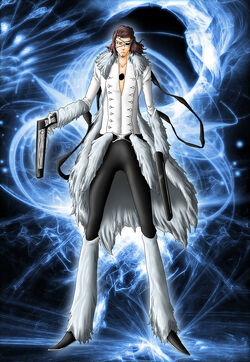 I know that mine role is difficult to comprehend from a merely mortal perspective, for universal truths oft require more universal understanding, but even shouldst thou believe that there are such universal constants as true good, or true evil, thou must realise that these facets of consciousness are defined by their opposite; without good, thou wouldst not know what evil is, and without the darkness thou wouldst not appreciate the light. All things hath a place, yet no one thing should overpower any other; this is the way of balance.

Not much is known about Dukki Laqrax before he appeared as a Cosmic Entity, to whom was assigned the task of keeping the Universal Balance. He is responsible for regulating the balance in all the Multiverse. From what little has been said about Dukki's past, he is the last of an ancient race that existed in the old Universe. Thus, it is presumed that he was alive before the last Creation event.

It is not known when or how this happened, but at some point in your life Dukki became a Cosmic Entity responsible for regulating the balance of the Universe. By his own words, "I act as final arbiter upon this Universe, for none else will serve this role."

Thus, their role is essentially to regulate the power of two opposing entities, never letting that one will get enough power to dominate the other. "Should either of the entities ever gain enough power to exceed their opponent, then I am here to act as the agent of the balance through either a reduction in ones power, or the elevation of the other." This makes it as the ultimate agent of balance, behind only the Living Tribunal and God himself.

As the Agent of Universal Balance, Dukki is ridiculously powerful. To help him use such immeasurable power without causing a cataclysm, Dukki divided his own power into other three parts, which also made ​​him more simply known by the alias Los Lobos. The three parties are a pair of long-barreled pistols, an eyepatch and spectral wolves that he is able to summon in battle. According to him, their total power is so colossal that a single energy burst could cause catastrophic side effects. The division of his power came when he accidentally caused the destruction of many universes when trying to stop one of the constant fights between Oblivion and Death.

Superhuman Strength: Dukki possesses vast superhuman strength the full limits of which aren't known. He is easily able to lift more than 1000 tons with a single hand, without making effort. During his few battles, he was seen fighting simultaneously hundreds of enemies. He is physically strong enough to stop Death and Oblivion, two immensely powerful Cosmic Entities barehanded. Dukki was also able to hold back Hulk and Thing with ease.

God-like Speed: Despite his immense strength, the most powerful physical capacity of Dukki is his speed. He is able to move hundreds of times faster than light, and can even cross an entire galaxy in few seconds.

Superhuman Durability: Dukki possesses an extremely great durability that the full limits aren't known. He can take an galactic explosion without being even scratched, and was able to resist several attacks from Hulk and Thor. He can resist to a full powered Galactus cosmic beam and deflect it without taking damages.

Limitless Stamina: Dukki's musculature produces no fatigue toxins during physical activity. As a result, he possesses a limitless stamina, and will never become fatigued.

Superhuman Intelligence: Dukki is able to quickly learn new things and pays attention to details that other people will usually ignore. He is smart enough to quickly create theories and deduce potential events.

Cosmic Omnipotence: Dukki can handle any form of the cosmic energy he pleases. It is so powerful that even Galactus can not match your domain. Thus, Dukki can produce extremely powerful attacks that can destroy galaxies instantly. It can also easily break a multiversal force field as if it were made ​​of glass. Even with the attacks already fired, Dukki is able to control them and make them change direction. The telekinesis the Phoenix itself was not able to affect these shots. He can also use this energy to increase his physical capacities.

Telepathic Immunity: Dukki is absolutely immune to all forms of mental powers. This is powerful enough to easily block the powers of Franklin Richards and the Phoenix.

Omnilock: He is absolutely immune against spacetime manipulation and reality manipulation, because he exist since before the Creation event, being not a part of the existence.

Teleport: He can teleport to any place in the Multiverse 1982, even other dimensions.

Although he avoids combat, Dukki is an extremely high-skilled shooter. This ability becomes more clear when he easily shoots from another galaxy and hits Silver Surfer. He can even shoot through dimensions and from other universes. He is also a skilled hand-to-hand combatant.

Retrieved from "https://marvelcomicsfanon.fandom.com/wiki/Dukki_Laqrax_(Earth-1982)?oldid=165154"
Community content is available under CC-BY-SA unless otherwise noted.