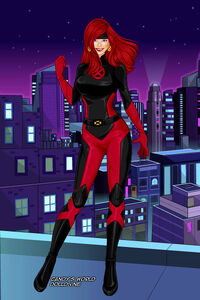 Dream comes from a rich family history of superheroes her mother was the co-leader of the X-Men as well as the Headmistress and her father served with Fantastic Force while her maternal grandparents were the founding members of the original X-Men and her paternal grandparents were the founders of the Fantastic Four. Dream is also the great-granddaughter of Christopher Summers (Scott’s father and Rachel’s grandfather); Nathaniel Richards (Reed’s father and Franklin’s grandfather) Dream is also the younger sister of David Richards also the member of the New Avengers. Dream has the red hair trademark from her mother and maternal grandmother and the blue eyes from her father and paternal grandmother.

Dream is an Omega-level mutant and has complete control of both her telepathy and her telekinesis.

Telepathy: can read minds and project her thoughts into other minds within a vast, potentially limitless radius. She has not always had access to her telepathy due to mental blocks. Even when her powers are inhibited, Dream's telepathic abilities are honed to sense residual energy to which she can generate psychic manifestations of past events.

Telepathic Illusion: ability to create realistic telepathic illusions and cause people to experience events which are not actually occurring.

Telepathic Cloak: can mask her presence from being detected by others. Her abilities can at times go undetected or be counteracted by other more powerful telepaths depending on their level of skill in using their own psi abilities. She can extend these defenses to others around her as well.

Psychic Shadow: ability to mask herself, and other peoples' presence from those around her. Can telepathically disguise herself, making her appearance that of a shadow.

Mind Control: ability to control the minds of others.

Mind Possession: ability to possess the mind of another, and use that being's body as her own.

Mind Alteration: ability to alter the minds of others by force of will, changing their personality partially or entirely.

Psionic Shield: ability to erect a psychic shield for protection of herself and of others minds.

Telepathic Illusions: ability to create illusions to make herself seem to be invisible, look like someone else, or make others experience events that are not truly happening.

Mental Amnesia: Can erase any awareness of particular memories or cause total amnesia.

Psionic Blasts: can project psionic force bolts which have no physical effects but which can affect a victim's mind so as to cause the victim pain or unconsciousness and turning someone brain-dead.

Psionic Shield: ability to erect a psychic shield for protection of herself and of others minds.

Dream's Maternal Grandparents Cyclops and Phoenix are the founding members of the X-Men.