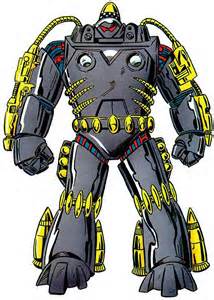 At some point Hammer Industries allied itself with the Skrulls, contracted to construct an android army. CEO Justin Hammer went so far as to steal the original blueprints for the Dreadnoughts from HYDRA. Several months later, a Crimson Dynamo Skrull stormed the Hammer Industries facility where the company first built the prototype for the progress on the completed models. The interrogated Hammer revealed the location of the prototype. The Skrull thus activated the robot, only for it to be destroyed by Iron Man, Captain America, Whirlwind, and Winter Soldier.

Retrieved from "https://marvelcomicsfanon.fandom.com/wiki/Dreadnought_(Hammer_Industries_Model)_(Prototype)_(Earth-6109.2)?oldid=121205"
Community content is available under CC-BY-SA unless otherwise noted.