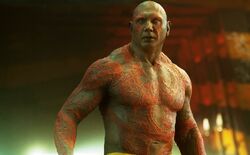 I would tear this galaxy apart piece by piece if it meant that no one else ever had to go through the things I have gone through.

Drax is a member of a primitive species whose planet was visited by Thanos and the Black Order, who sought to balance the planet's population. In the ensuing chaos, Drax lost his wife and daughter. He then went on a rage-filled killing spree across the galaxy.

His quest eventually led him to cross paths with a group of other inter-galactic criminals who found themselves in a situation where they were forced to save the galaxy from the Celestial Eson the Searcher. They would go on to call themselves the Guardians of the Galaxy and eventually formed a familial relationship with each other.

Retrieved from "https://marvelcomicsfanon.fandom.com/wiki/Drax_(Earth-9999)?oldid=246220"
Community content is available under CC-BY-SA unless otherwise noted.