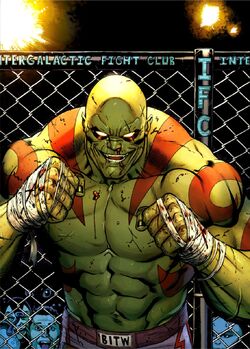 Art'r Dogl'Lass (former alias & fake identity), The Destroyer, Drax the Guardian of the Galaxy, Drax the Meditator, Drax the Pacifist, Drax the Warrior, The Blacksmith
Identity

Drax was a skilled blacksmith and warrior who comes from a race of primitives who are considered naive and hopelessly underdeveloped by the more advanced galactic groups, although they were a fierce and capable warrior race who follow a tribal-like culture. At some point in his adulthood, however, his wife and daughter were unfortunately killed by Ronan the Accuser, who was also under the command of the Mad Titan Thanos, whom had his forces slaughter half of his race's population in their home planet. During the slaughter, the planet's population was randomly divided into two parts, and one of them was slaughtered. Drax, forcibly restrained by Ronan the due to his aggressive behavior against the forces of Ronan and Thanos, was put on the side which survived, but Hovat and Kamaria were murdered with the rest, much to Drax's great despair to watch his wife and daughter get mercilessly slaughtered. As a result, the heavily broken and devastated Drax set out on a rampage across the universe in search for vengeance against the Kree extremist and warlord, before he would continue his true mission against the true mastermind of his home's assault that was the malevolent and ambitious Thanos.

Shortly after his family's death and the overall slaughter to the half of his people, Drax was mercilessly driven into a path of vengeance and went on a bloody rampage across the galaxy in search of the murderous Kree, gaining a reputation as one of the most dangerous beings in the intergalactic community and earning the infamous nickname, "The Destroyer". Along with his murderous conquest, Drax temporarily went by the fabricated alias and identity of Art'r Dogl'Lass when he dedicated his whole life as an extreme zealot and terrorist against Ronan and his fellow comrades. After more than thirty counts of murder and several counts of bodily harm to those who opposed him, he was arrested by the Nova Corps and brought to the Kyln, seemingly for the rest of his life.

During his long-time stay at the Kyln, Drax eventually became uneasy allies with the half-human Star-Lord, the adoptive daughter of Thanos Gamora, the arrogant and aggressive Rocket Raccoon, and the hulking and giving tree Groot, forming the heroic outlaws known as the Guardians of the Galaxy. Along with their plane to escape the Kyln, they agreed to work together to escape and sell the Orb for a massive profit and supposedly move on with their lives if it happens.

However, when it was discovered that the Orb contained one of the Infinity Stones, the Power Stone, which was being sought out by Ronan the Accuser, his teammate Groot courageously convinced his friends to risk everything to stop Ronan's diabolical plans. After the great Battle of Xandar which ended with Ronan's defeat and Groot's temporary death, in which he finally exacted his vengeance on the Accuser, Drax left Xandar with the rest of his fellow Guardians, finally declaring that Thanos himself was his next target as an act of avenging not only his family, but also half his people who perished in the Titan's conquest.

As a Guardian of the Galaxy, he continues to travel with his teammates on their adventures, such as them being hired by the Sovereign as mercenaries in exterminating the parasitic life-form Abilisk, their confrontation against the planetary Celestial Ego the Living Planet, followed by their secret investigation on Hala against the Kree black market, forcing them to join forces with the noble Kree Navy Major and future Guardian Mar-Vell in order to successfully defeat the real perpetrator responsible for running the illegal dealings.

Unfortunate to the Guardians themselves, their continued cosmic adventures with their newfound member Major Marvel went short-lived after finding out that the both races of the Skrulls and the Kree were once more have reignited their million-years war on each other. In response, the Guardians were immediately obligated in helping to end the war and restore peace between both races without siding with either two of them.

Realizing that they were miserably losing and were on the pinnacle of failing on their mission in ending the war by themselves, Mar-Vell then ultimately makes up his mind, and immediately rides his spacecraft to leave the planet Skrullos, seemingly leaving the entire warzone behind, though in actuality, he left so that he could go to his last resort, who was also the final key into ending the Kree-Skrull War once and for all, his old friend and ally back on Earth, Carol Danvers. During the arrival of Danvers and Mar-Vell on Skrullos, that was that very moment where Danver's immeasurable powers that she never even knew had existed before, had consequently help the rest of the intergalactic heroes put an ultimatum, a final end towards the Kree-Srull War for good.

Unique Physiology: Drax the Destroyer came from an undisclosed primitive race that has much more physical prowess than most species across the galaxy, being able to lift bulk weight and breaking through solid stone and metal. Drax's enhanced musculature grants him immense physical strength and stamina, along with his skin being impact resistant the granted him enhanced resilience and durability.

Retrieved from "https://marvelcomicsfanon.fandom.com/wiki/Drax_(Earth-61615)?oldid=235144"
Community content is available under CC-BY-SA unless otherwise noted.