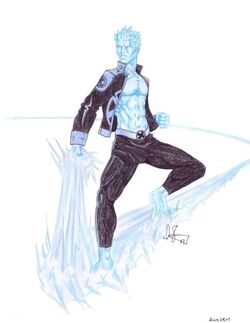 Brown
Unusual Features
In his normal form, his body is entirely made of ice.
Origin
Origin
Mutant Frost Giant reincarnated as a human X-Man.
Creators

This world's Iceman is very different from his other-worldly counterparts. This is because he is a mutant Frost Giant, rather than a mutant human. He remembers very little, but here is what was pieced together through telepathic probing...

Bobby's family is unknown, and so is his Frost Giant name, but it is suspected that Loki is his father. He was raised by the collective Frost Giant family, and he had a good life. It was always known, from birth, that he would be more powerful than any of the Frost Giants. So, he was respected and feared among his "family."

One day, Bobby ventured into the hidden realm of Asgard that was forbidden from the reach of Frost Giants. So the Giants stripped him of his powers and his memories, and sent him to Earth. There he was placed in an orphanage, where he was adopted by Mr. and Mrs. Drake and named Robert. He began attending middle school, and got a girlfriend, with no memory of his former life. One day, his girlfriend didn't want to go to school, so Bobby wished for a snow day. So he went outside, and raised his hands to the sky. Soon, a blizzard began, and Bobby cheered, and stayed outside. But the snow stuck to him, until he was covered in ice. He was afraid, and he screamed very loud, which attracted the attention of Charles Xavier. He was the last member recruited to Xavier's X-Men.

He had difficulty making friends due to his amnesia, but they were happy to have him nonetheless. His ice powers proved potent in battle, and the more he used them, the more he remembered. Soon, he was fighting the Brotherhood, and he froze Mastermind in a block of ice, but he saw Cyclops shoot a laser and he escaped. Mastermind was killed directly due to his actions, and 3 other casualties were made that day. Afterwards, Magneto and Toad joined. Iceman just kept wanting to fight so his memory could come back, but he covered this with a layer of joking around, pranking people, etc. After Krakoa, Cerebro was able to amplify his powers, and he reached deep into Iceman's brain, pulling all of his hidden memories out. To cope with these new memories, he left the team.

After he came to terms with his memories, he wanted to return to the X-Men, but he found it far different from the X-Men he remembered. Warren came to him and told him he intended to form a new X-team called X-Factor. He agreed to join, but Cerebro approached, stating that they would take the clones of Cyclops and Jean Grey or be shut down. Iceman and the others argued how disturbing that was that he cloned them, but Cerebro telepathically threatened Iceman, stating, "I can hide your memories beyond any other telepath's reach, and I can deactivate your powers with a thought. That wouldn't make it hard to dispose of you." So the clones were accepted, but Iceman vowed he'd never again be led by the Professor.

As a member of the Frost Giant race, Bobby has all of their abilities. His mutation is increased applications of his cryokinesis, and emotions, in addition to a more human form.

Illusion Creation: As a Frost Giant, Iceman has the power to create illusions, though this power is barely developed.

Alternate Ice Form: Iceman has the power to transform his body into organic ice.

Cryokinesis: Iceman has the ability to manipulate, control, and generate ice constructs.

Immortal: Iceman seems to age very little, as he is one of the oldest Frost Giants, and he looks to be only in his 20s.

Blizzard Creation: Iceman has the ability to make it snow or hail.

Flight/Levitation: Iceman can levitate or fly on clouds of moisture.

Healing Factor: Iceman's ice form enables him to heal all injuries, even being shattered or decapitated.

Hydrokinesis: Able to convert water to ice, and vice versa.

Retrieved from "https://marvelcomicsfanon.fandom.com/wiki/Draka_(Earth-5)?oldid=244893"
Community content is available under CC-BY-SA unless otherwise noted.