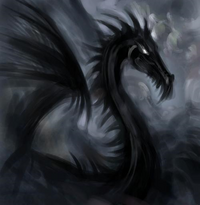 None, (as Dragon)formerly Weapon Plus, Weapon X
Relatives
None
Universe

Black
Unusual Features
Takes the form of a large Dragon.
Status
Occupation
Cosmic entity, Celestial, Elemental
Origin
Origin
The Dragon Spectrum is one of the oldest known cosmic entities, representing death that has not yet come to pass. (Cosmic Being)
Place of Birth
Big Bang
First appearance
Unknown

The Dragon Spectrum is one of the oldest known cosmic entities, representing death that has not yet come to pass. The Dragon Spectrum is an immortal, indestructible, and mutable manifestation of the prime universal force of death. Born of the void between states of being, the Dragon Spectrum is a child of the universe. It is the nexus of all spatial vectors which does, has, and ever will exist in all realities of the omniverse, the Guardian of Devestation, and a de-facto guardian of the Jem'ri Crystal. Dragon is among the most feared beings in the entire universe - having the power to manipulate reality in any part of the universe, as well as destroy it entirely, which is part of the Dragon's purpose: "The Judgment of the Dragon": to burn away what doesn't yield. Recent interventions of the Dragon suggest that "what doesn't yield" is what has become stagnant instead of naturally evolving.

During its time as a sentient entity, it traveled the cosmos just like other cosmic beings though at first, the Dragon Spectrum was a formless mass of energy, but thousands of years ago, it came to Earth, and met a magician named Tallia (who worshiped the legendary Dragon), whose daydream-like visions prompted the Dragon to adopt the serpentine form it has today. She asked the Dragon to help her by lending its energy to project a stone pillar (which resembled a watchtower) across the multiverse. Dragon Spectrum left Earth, but was called back when it felt the mind of a human transcend the physical realm, a mind that resonated with the Dragon's energy. A young Andre Kane had created an unnatural dimensional rift through time and space within himself. In doing so, Andre's mind was being dragged along to the other dimension while his physical self stayed intact. Dragon lent its energy to reform the connection, and kept close watch on young Jason, as it felt a kinship with the young mutant. Years later when Andre was dying in the Core Base, his mind called out for help and the Dragon Spectrum answered and saved him, transforming Andre into the Dragon.

Its powers appear to be at their strongest when bonded to Andre Kane (possessing the powers of dimensional force/spacetime godhood, complete control over the realms of energy, space, and time), as the two have a strange, profound connection to each other (Andre is the closest thing the Force has to physical form).

Because the Dragon was linked to Andre Kane's psyche, he has maintained a "cosmic" link to all like he's come into contact with.

As Andre Kane, the Dragon possessed the human strength of a man of his age, height, and build who engaged in intense, vigorous exercise. Using his cosmic powers and gravitation, Dragon could lift an unknown amount, probably in the range of thousands of tons.

Equipment: None known
Transportation: Flight under his own power, intergalactic flight through hyperspace, multiple dimensions, and the Vocivus Plane.
Weapons: None known