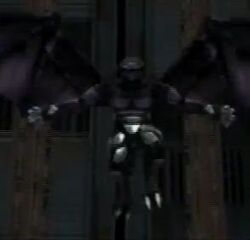 Little is known about Dragon Man's life before the formation of the Masters of Evil. It can be assumed to be similar to his mainstream counterpart.

Dragon Man was hired by Doctor Doom to join his Masters of Evil. However, he was more loyal to the Mandarin, thus has followed him through his defection and failed coup d'tat. He was destroyed when the Ultimate Alliance found Mandarin's new base.

2 years later, Dragon Man was rebuilt & upgraded, with his A.I. enhanced to Ultron's level, by the Skrulls. He was put in charge of guarding the Fantastic Four in a captured Baxter Building. But fate repeated itself in the form of Spider-Man, Toxin, Electro, and Deadpool.

Dragon Man has no particular skills or abilities. However, his sheer physical strength, coupled with the rest of his powers, make him a formidable combatant. Also, despite his great size and mass, he can run at speeds comparable to those of a well conditioned human athlete.

Retrieved from "https://marvelcomicsfanon.fandom.com/wiki/Dragon_Man_(Earth-6109.2)?oldid=255337"
Community content is available under CC-BY-SA unless otherwise noted.