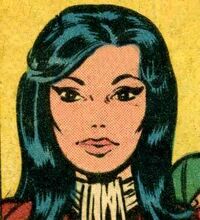 Black
Unusual Features
Looks to be in 20's but really is in her 60's.
Status
Citizenship

Dr. Ilya Foro was a leading scientist that worked for Stark-Fujikawa. In 2074, in an old Oscorp Industries building in a secret underground lab, she finds a stasis pod, and inside is a 5 year old. The name on the pod says "Osborn Subject 1974 Project Rebirth II". She raised Subject 1974 as her adopted son, and named him Michael after her own son, who was killed in a fire. She learned that Project Rebirth was the name of the project that created the legendary Captain America in the early 20th century, and she hid the facts about Michael Osborn's origins. Dr. Faro at first got him different teachers in martial arts after he discovered he had incredible strength and agility. At 7, he started learning Ninjitsu, Aikido, western boxing, Taekwondo and other strikes: Karate, Muay Thai, Choi Kwang Do, and gymnastics and, like his genetic father Captain America, he has his own unique fighting style. He became a master of multiple martial arts. At age 10, he learned how to use every weapon know to man (swordsmanship, stick fighting etc.) He was also home-schooled until 15 because of his abilities.

When Doom became President of the United States "by right of conquest", he make changes, putting cyberspace-connected Dive Booths in every city. Then he created a national corporation called Cynex, and arrested the heads of the previous corporations, downgraded the credit levels of all citizens from the unlimited Black Cards to Gold Cards, and forced the corporation CEOs to choose one amongst them to be killed. CEOs Shudo and Hikaru-Sama were killed. Dr. Ilya Faro became acting head of Stark/Fujikawa, with her son. When John Anthony Herod took over America, her son went missing, and Green Goblin 2099 was on a wanted list with many other heroes and mutants.

America then became free of both Megacrops control and Doom, time to rebuild a nation. Stark/Fujikawa Industries Inc. was taken back by Andros Stark (the future grandson of Tony Stark), who changed the name Stark/Fujikawa Industries into Stark International 2099. He made Michael Rogers Osborn a new CEO along with Dr. Ilya Faro, and they started helping the people rebuild.

None, a normal human.

Dr. Ilya possessed the normal human strength of a woman of in her 20th age, height and build who engaged in intensive regular exercise. Note she is really 60.

Retrieved from "https://marvelcomicsfanon.fandom.com/wiki/Dr._Ilya_Faro_(Earth-928.2)?oldid=200379"
Community content is available under CC-BY-SA unless otherwise noted.