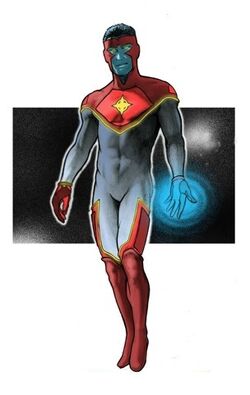 Quasar and Moondragon had many adventures out in space. This reminded them of their romance in earlier years. They decided to rekindle it and have a child, but there were complications with the pregnancy. They were told it would be impossible, so Doug Vaughn was secretly a test tube baby. Even so, one of the complications meant that the child would have light green skin.

Growing up a human in outer space was weird for Doug. Even though he was raised among other humans on the moon colony, and even though he occasionally got to visit powered people like the Guardians of the Galaxy and the Inhumans, he felt like he didn't belong among either. He missed the idea of a typical family that, as humanity disappeared, was replaced by mutant families. He didn't like the idea that all schools would share aspects with the Xavier Institute. But nobody really cared what Doug thoughts, only that he was beginning to telepathically force it into their minds.

Doug decided, through the tales he had heard of the Avengers, that he was going to join their number. But he didn't get to until the news got out that the Avengers were captured by the Super-Skrull army, and then it moved to the top of his list. He flew into outer space, and soon met up with Marvel-Man, who he explained his plight to. Marvel-Man revealed that he had the same plan, and upon finding the ship, they met up with the new generation of Avengers, and helped them battle the Skrulls. Afterwards, both of them joined the group.

Telepathy: Doug has mildly developed telepathy allowing him to read minds, shield minds, and possess people. He is the Avengers' weakest telepath, but with training, could grow to be the strongest.

Telekinesis: Doug has advanced telekinesis allowing him to lift objects with his mind, create energy constructs, and fly. He has been using these powers to suggest that he still has the Quantum Bands.

Doug is proficient in armed and unarmed combat, due to being taught by his father (a former S.H.I.E.L.D. officer).

Equipment: None known.
Weapons: Doug pretends to have the Quantum Bands, and carries a pair of combat knives matching those of Drax the Destroyer.

Doug claims to have the Quantum Bands, but in truth, he accidentally destroyed them as a child. Both he and his father used their powers to pretend this incident never occurred since it could be a terrifying indicator of Doug's true power.