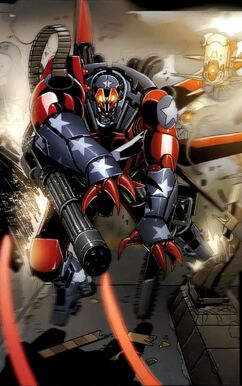 This armor's fitted with the latest in military weapons. Oh, my mistake. I make the weapons by myself. I built it from scratch with my own hands, and I know just what to do with this huge-ass hunk of steel. People need protection, and justice. Seems like I'm into that concept.

Doug Jones III, also known as Detroit Steel, is a superhero donning a large armored suit, fitted with a lot of weapons and advanced technology. Doug's daughter, Virginia, is also a superhero, under the nickname of Rescue. Doug was motivated to become a superhero after witnessing that a lot of people exploit military weapons and technology for their own evil uses. Doug's a genius as well since his childhood, and using his genius-level intellect, built the armor from scratch. At one point, he married a woman and got a daughter named Virginia, who, as said, also becomes a superhero. Doug then defended people from injustice and evil, and the abuse of weapons. Doug found himself in a bigger role after the Director of HATE, Dirk Anger, recruited him into his Avengers program, becoming one of the earliest members of the superhuman team along with his daughter. Along with the Avengers, they became a peace-keeping team and defenders of the world. He first appeared in Avengers: World on Fire Volume 1 Issue 1.

The Spark of Steel

Doug was born in Detroit (hence his superhero name, Detroit Steel) to two parents who had drastically different occupations. His father was a former Coast Guard member, while his mother's a waitress. Since he was a kid, Doug somehow exhibited a genius-level intelligence. He won several science competitions, ranked 1 in most of his education career in schools, and made his first circuit component in grade six. His parents always advised Doug to start a good family, and use his intellect for good. Not just that, Doug's parents also told him stories about his grandfather, who was said to be a legendary WWII fighter, as well as pilot.

During his adulthood, Doug, following his grandfather and father's footsteps, joined the military. However, Doug joined the Navy. Doug quitted the Navy after he met a woman, and married her. The woman's name was kept secret by Doug, as she died in a "tragic way" (later, it's revealed that she died after got crashed by a bullet train due to an incident). The woman however, gave birth to Virginia Jones, who becomes the superhero "Rescue" in the future.

At one point, Doug witnessed something that'll charge his "inner hero". Doug saw a terrorist attack in his town, and he (allegedly) witnessed that they're using "state of the art tech and weapons that the US don't even possess". Remembering his military experience, he knew that things got out of hand in the US as "smugglers may offer terrorist WMDs that can sh*t the hell out of the US". As such, Doug decided to make something to teach terrorist that not only they possess advanced weapons. In secret, Doug made a powered armor (Detroit Steel), taking half-a-year in construction. After the construction's finished, Doug then hit a terrorist hideout "so hard that it turned everything around the area into ashes". After that, Doug's armor became a sensation around the states. But, at that time, his identity wasn't known in the armor. The first person to know his identity is his daughter, Virginia, who deemed her father crazy.

Doug revealed his identity publicly when he's interviewed by journalists, after preventing yet another terrorist attack. While the public didn't really know who's Doug, the Navy did know Doug, as once Doug worked in the Navy. Due to his acts, Doug was given the medal of honor. In the following months, Doug got a sidekick, no other than his daughter, Virginia, donning a lighter armor named "Rescue". Apparently, Doug and his daughter's acts were noticed by Dirk Anger, the Director of HATE. But that's before he thinks of recruiting them to the Avengers.

One day, Detroit Steel battled the supervillain, Abomination (who he claimed to be the first supervillain he fought), along with his daughter. After defeating Abomination, Detroit encountered HATE's director, Dirk Anger. He accidentally threw Abomination to Dirk, who in turn, lifted Abomination and threw him "to Scotland", revealing his strength. Due to that, Dirk got angry and caused an earthquake. Detroit calmed him down.

Doug possesses no super-human powers. His superhuman powers are derived from his "Detroit Steel" armor.

Doug's an accomplished combatant, inventor, engineer, and a decent marksman.

Class 90. With the Detroit Steel armor, Doug's able to lift up to 90 tons.

This huge hunk of steel. I thought that it's gonna be the strongest weapon the military has ever seen. Until that mythical son of a gun appeared.

Retrieved from "https://marvelcomicsfanon.fandom.com/wiki/Doug_Jones_III_(Earth-4045)?oldid=231110"
Community content is available under CC-BY-SA unless otherwise noted.