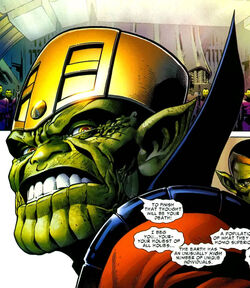 So... after all these millenia the infernal Kree have sent another emissary to the world called Earth! But why? Surely that puny globe is too insignificant to deserve their scrutiny... just as it is beneath the notice of us... the mighty Skrulls!

Dorrek VII's early life is the same as that of his Earth-616's counterpart.

During his time as Skrull Emperor, Dorrek was approached by the Dard'van, a sect that prophesied about an apocalyptic event for the Skrull Empire. Feeling his authority challenged, he sentenced the sect's leader, Veranke, to a deserted planet.

After finding out his daughter, Anelle, had a romantic relationship with Captain Marvel and gave birth to a son, whom she named Dorrek VIII. Feeling betrayed by his own daughter and considering the child an abomination due to its mixed heritage, Dorrek VII ordered the child destroyed. Anelle managed to have the baby secreted away to Earth where it would live for years unaware of his mixed heritage but she was executed under her own father's orders.[1]

The decision to execute Anelle created a rift between the Emperor and his wife R'Klll. Veranke had managed to escape exile with the help of her fellow sect members and took advantage of the crisis between the royal couple. Posing as R'Klll, she murdered Dorrek in cold blood, making it look like payback for killing their daughter.[2]

Retrieved from "https://marvelcomicsfanon.fandom.com/wiki/Dorrek_VII_(Earth-1010)?oldid=218178"
Community content is available under CC-BY-SA unless otherwise noted.