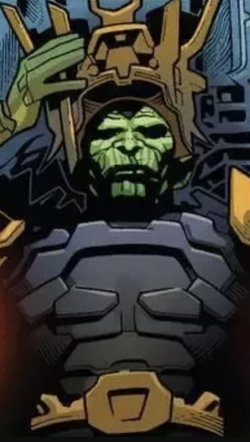 I will not have my bloodline sullied by a halfbreed abomination. Execute them, by any means necessary.

Dorrek is the seventh heir to the throne of the Skrull Empire. Bred into the Kree-Skrull War, he has always been militant and cold. After he discovered that his daughter, Anelle, was pregnant with a half-Kree baby, he became enraged. He ordered the execution of his own daughter, the baby, and the baby's father, Mar-Vell.

After hearing that his daughter was dead, he assumed the baby was too, and he resumed his daily duties of dismantling the Kree Empire. He kept on this path for the next several years until the day Galactus came to Skrullos. Although the Avengers arrived to intervene, Dorrek refused to abandon his home world, and died with the majority of his people.

Retrieved from "https://marvelcomicsfanon.fandom.com/wiki/Dorrek_VII_(Earth-101)?oldid=262770"
Community content is available under CC-BY-SA unless otherwise noted.