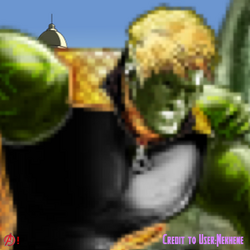 During the Kree-Skrull War, the Super-Skrull kidnapped Captain Marvel and presented him to the Skrull Emperor. While being imprisoned, Captain Marvel and the Emperor's daughter, Princess Anelle, had a brief affair and she conceived a child. Fearing for his safe, Anelle sent the child away with her nursemaid immediately after his birth. The servant took the child to Earth and raised the child as her own, posing as a single mother working in real estate and named the child Theodore "Teddy" Rufus Altman.

On Earth, Teddy used his powers mainly in an effort to fit in with his high school classmates, particularly the class president and basketball team captain, Greg Norris. Fitting in for Teddy included using his shapeshifting to provide access to New York City high life by impersonating various superheroes and celebrities. Finally, when Greg coerced him into breaking into the ruins of Avengers Mansion, Teddy decided that some things were more important than fitting in, and rather than let Greg loot the mansion, he ended the friendship.

Teddy was one of the people listed in the Young Avengers Program compiled by the Vision to be used to form a new team of superheroes and secretly finding his and Wanda Maximoff's reincarnated children.

Teddy's life changed again when the shape-shifting extraterrestrial known as the Super-Skrull showed up, claiming that Teddy was a Skrull. The Super-Skrull was surprised to learn that Teddy had super strength and wondered "perhaps the rumors about his father are true."

The Super Skrull followed the Young Avengers to the home of Wiccan, where Teddy's mother was waiting for him. The Super-Skrull released a device designed to turn Teddy into his true form, trying to prove to him his Skrull heritage. But the device didn't change Teddy's physical appearance. Instead Ms. Altman, who was also caught in the device's beam, turned into a Skrull. When the Super Skrull accused her of being a traitor to her race, she responded by saying that the Empress ordered her to protect Teddy. Before she could say much else, the Super-Skrull killed her and kidnapped Teddy.

The Super-Skrull broadcasted to all Skrull worlds that he had located Dorrek VIII, though Teddy insisted that he's not a Skrull, he's a mutant. Kl'rt insists that he was, and revealed the truth about his past. He insists that he must return to his people so that they may reunite the Skrull Empire. Kree soldiers then arrived to help Teddy, stating that the Kree looked after their own. A battle then erupted between the Kree and the Skrull, both claiming Teddy as their own. The only solution that Teddy saw to end the war was surrender. It was settled that Teddy would spend half an Earth-year with the Kree and the other half with the Skrull, at which time he would declare his ultimate allegiance, while also being able to make scheduled visits to Earth. However "Teddy" was the Super-Skrull disguised as him, therefore the real Teddy stayed on Earth.

Teddy is a hybrid of both Kree and Skrull. As a result, Hulkling has inherited powers and abilities from each race, though some are more potent due to his hybrid nature. Hulkling's alien physiology also protects him from being manipulated by pheromone based powers, such as those of Daken.

Retrieved from "https://marvelcomicsfanon.fandom.com/wiki/Dorrek_VIII_(Earth-1010)?oldid=215934"
Community content is available under CC-BY-SA unless otherwise noted.