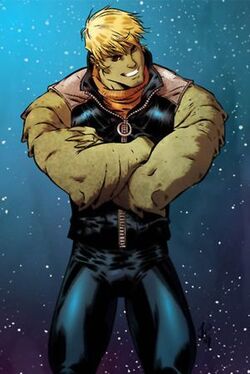 Both of my species treat my like an abomination, but you? You treat me like a person, you make me feel loved. I can't thank you enough for that.

When the Kree soldier Mar-Vell fell in love with the Skrull Princess Anelle, they conceived a child in an attempt to unite their two races. Anelle named the child Dorrek VIII, after her father, but when it was discovered she was pregnant with a Kree baby, she was exiled from her home planet.

Mar-Vell tried to help Anelle and the newborn baby escape, but it was in vain as Anelle ended up getting killed. Mar-Vell was able to get the baby to the planet Earth, which he had always been fascinated with, and left the baby in the care of Anelle's handmaiden, R'Kel, who took the form of a human single mother.

Adopting the name the Altmans, Dorrek was raised with the name Teddy. He didn't discover his true heritage until he turned 16, and became heartbroken that he had never known his true parents, and started using his powers to lash out in private.

He was eventually tracked down by Riri Williams and Kate Bishop, who offered him a place to fit in. He agreed and joined the Young Avengers, and quickly developed a crush on the reincarnated son of the Scarlet Witch, Wiccan. Over time, the two started dating and fell in love. Wiccan was able to help Teddy get in touch with his humanity, and he grew to love using his powers to help people.

[[Category: In a Relationship with Billy Kaplan Characters]]

Retrieved from "https://marvelcomicsfanon.fandom.com/wiki/Dorrek_VIII_(Earth-101)?oldid=248232"
Community content is available under CC-BY-SA unless otherwise noted.