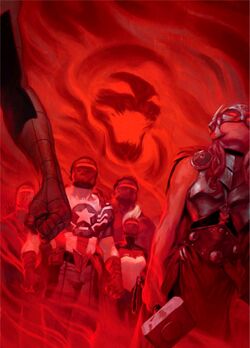 NO, SORCERER. YOU'VE come here to DIE!!! YOUR WORLD is now MY WORLD, like ALL WORLDS!!!

Born untold thousands or even millions of years ago in the dimension of the vastly powerful energy-entities called the Faltine, Dormammu and his sibling Umar gathered matter to themselves to increase their power, a practice anathema to their fellow Faltine, becoming their dimension's mightiest sorcerers. Ultimately slaying their parent Sinifer, they were driven from their home dimension, the Faltine deeming their garnering of such energy intolerable, and assumed humanoid forms to explore others.

When Olnar died in an attempt to conquer the realm of the Mindless Ones, the siblings used the opportunity to murder most of the Mhuruuks (the magical priest class under Olnar’s rule) and successfully sealed off the Mindless Ones from the rest of the populace.

They secured rulership of the realm under the guise of heroes for ages. Later on Dormammu would banish Umar after the same had given birth to Clea into one of the pocket dimensions under his control, taking sole custody and rule of the entire Dark Dimension.

Wielding frighteningly tremendous supernatural power of apocalyptic proportions, Dormammu seeks to conquer every dimension of the known universe or the Multiverse, including the Nine Realms and other pocket universes, including the Earth.

Although Dormammu had already conquered many realities throughout the Multiverse, he couldn't invade Earth due to the Sanctums built by the Masters of the Mystic Arts to protect it from any extradimensional threat.

To achieve this, he managed to employ contact with Kaecilius, a rogue member of the Masters of the Mystic Arts who had become disillusioned with the Ancient One's ideals. The two struck up a deal, with Kaecilius and his followers known as the Zealots, agreeing to gather the necessary items to enable the Dark Dimension to come to Earth.

Before Dormammu could complete his plans, he was confronted by Doctor Strange, who used the Eye of Agamotto to trap Dormammu in an endless time loop until he agreed to leave Earth and take Kaecilius with him, turning him and the Zealots into one of the Mindless Ones. Dormammu has ever since of planning on invading Earth once he finds a way out on defeating Doctor Strange, Masters of the Mystic Arts, and the rest of the superheroes that defends the Earth from his mystical attacks.

Dormammu once possessed Doctor Strange's body and tried to use him to commit crime and take over the world. This plot eventually fails and Dormammu is driven out of Strange's body by the rest of the Masters of the Mystic Arts. Dormammu then retreats back to the Dark Dimension and tries to regain his might again. Dormammu, who wanted revenge, immediately ordered the Mindless Ones (one of those he sent was the transformed Kaecillius and the Zealots) to attack Earth. Mr. Fantastic had invented a device, which could've send the Mindless Ones back to their home dimension by channeling the energies of the heroes nearby. However, the device also allowed Dormammu's separated energies to be reabsorbed by Dormammu once again.

Dormammu, who was already regaining full strength, was interfered with by Strange again. With the aid of Avengers, Fantastic Four, and the Defenders, both Doctor Strange and Dormammu were both taken to an unknown land which is beyond the effect of time. Doctor Strange takes his chances and sends him and Spider-Man back into time and stopped Dormammu from seizing power ever again. Dormammu was defeated once again, but that doesn't stop him from ever continuing on his conquest invading Earth.

In the wake of the aftermath of several conflicts in superhuman history, including Dormammu's attempted invasion, a secret organization of heroes was eventually formed by Iron Man, Namor, Mr. Fantastic, Professor X, Black Bolt, and Strange himself. This organization was later known as the Illuminati, whose goal was to prevent such events from happening again, including the prevention of Dormammu and any other threatening cosmic beings' return on Earth.

He is considered more powerful than Lucifer, Marduk, Mephisto and Satannish and apparently served as the creator of the latter. Dormammu is of sufficient skill and might to tamper with the spells of Odin against his will, as the Lord of the Dark Dimension did once to revert Thor back to his mortal guise. Dormammu had sufficient magical power to hold his own against clashes with Agamotto (a spawn of one of Earth's Elder Gods with power enough to stalemate Galactus) when the latter served as the Marvel Universe's first Sorcerer Supreme, even aided by an alien disciple; to this day, the Vishanti regard him as their prime enemy and that of the Sorcerer Supreme.

Retrieved from "https://marvelcomicsfanon.fandom.com/wiki/Dormammu_(Earth-61615)?oldid=206590"
Community content is available under CC-BY-SA unless otherwise noted.