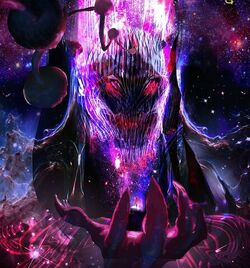 Earth-101
Base Of Operations
The Dark Dimension
Characteristics
Gender

Time is a concept foreign to me. You need not use it against me. For you have already tried, and failed.

Dormammu was created through unknown means when various energy signatures across the Dark Dimension melded together, bursting to life as the most powerful being to ever exist in that plane of reality. He quickly gained dominion over the Dimension, acquiring control over thousands of other realities.

He eventually gained a special interest in the realm of Midgard, due to certain humans being adept at a similar form of sorcery. This resulted in him forming a rivalry with the one known as The Ancient One, who trained the other Masters of the Mystic Arts.

He was eventually able to coerce certain sorcerers, such as Baron Mordo, over to his side, feeding them with promises that if the Earth joined his dominion in the Dark Dimension, they would be made immortal. He eventually sent his daughter, Clea, to infiltrate and destroy them, but was shocked and appalled when she betrayed him, aligning herself with Doctor Strange.

Although he was successful in killing the Ancient One, Doctor Strange was able to trap Dormammu in a time loop, conning him into relinquishing his dominion over the Earth. Reluctantly, Dormammu agreed to his terms and returned to the Dark Dimension. However, he had formed an obsession with the Earth, and has begun plotting a way to claim it for himself by any means necessary.

Retrieved from "https://marvelcomicsfanon.fandom.com/wiki/Dormammu_(Earth-101)?oldid=250185"
Community content is available under CC-BY-SA unless otherwise noted.