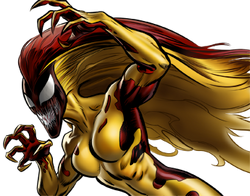 Little has been revealed about Diego's early life. Donna had a history of psychotic episodes, but despite this she passed a background check and became a prison guard. While watching Cletus Kasady and MacDonald Gargan, she was in touch with the symbiotic goo, turning her into Scream.

Retrieved from "https://marvelcomicsfanon.fandom.com/wiki/Donna_Diego_(Earth-1010)?oldid=134589"
Community content is available under CC-BY-SA unless otherwise noted.