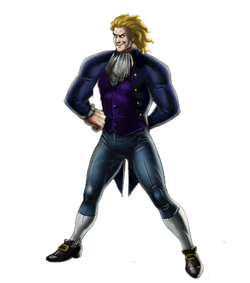 Blonde
Unusual Features
Pierce has replaced most of his organic tissue over the years with advanced cybernetics.
Status
Citizenship

An industrialist, Donald Pierce first appeared as a high-ranking member of the Hellfire Club Inner Circle, where he held the position of White Bishop, during that organization’s first direct encounter with the X-Men. During this conflict, he battled Wolverine, Nightcrawler, and Colossus, and when Wolverine nearly severed his arm, it was discovered that he was a cyborg. The Hellfire Club Inner Circle was eventually defeated and Donald Pierce’s whereabouts were unknown for several years.

Pierce later appeared with Lady Deathstrike and three other cybernetically-enhanced mercenaries (Cole, Macon, and Reese) who had been fatally wounded by Wolverine during the Hellfire's first skirmish with the X-Men. All five characters were consumed by their desire for revenge against the X-Men, and Wolverine in particular. To that end Pierce created an army of cyborgs out of low-life thugs and a few mercenaries. He named his army “The Reavers.”

Donald Pierce is an ordinary human and possesses no inherent superhuman attributes. However, he does currently possess them due to cybernetic augmentation.

Pierce is a cunning strategist and industrialist. He is also a good hand-to-hand combatant, though he tends to rely more on brute strength rather than technique in most situations.

Retrieved from "https://marvelcomicsfanon.fandom.com/wiki/Donald_Pierce_(Earth-1010)?oldid=148262"
Community content is available under CC-BY-SA unless otherwise noted.