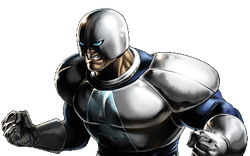 Dominic Petros is an immigrant from Greece and a mutant with the powers to generate powerful seismic waves from his hands strong enough to shatter inorganic matter and create localized earthquakes. Being a mutant and seeing his own kind hunted and killed made him realize how ignorant mankind can be and he decided to hide his mutant powers from the world.

He was approached by the mutant known as Mystique to join the Brotherhood of Mutants in hopes of getting Rogue back.

Avalanche is a mutant with seismic wave generation.

Seismokinesis: Avalanche is a mutant with the superhuman ability to generate powerful waves of vibrations from his hands, creating highly destructive effects through the air, water and ground. The vibrations can cause small inorganic objects to be shatter or crumble into dust. When used upon the earth itself or against large inorganic objects such as a buildings these generated vibrations can cause disastrous earthquake-like effects. Avalanche's control over his power is fine enough that he can move large objects, such as tanker trucks, without destroying them and even use them to smoothly throw his opponents off balance or weaken the structural integrity of building foundations or the ground itself. Avalanche can also cause tidal waves when directing his powers at large bodies water and possibly even tsunamis. His greatest effects can be found when he uses his powers on earth matter. When directing his powers at the ground he can cause ground tremors, forming waves of debris, open fissures in the earth, cause chunks of pavement or earth to blast up into the air and then fall in simulated landslides or avalanches. He often uses his skills as a means of transportation by using waves of earth matter to ride atop. With enough concentration, Avalanche can direct this power at Earth's tectonic plates to cause large-scale disastrous effects.

When directed against large objects like buildings or upon the earth itself, the vibrations can produce effects similar to those of an earthquake or avalanches within limited areas. Avalanche need not touch an object to affect it: he can direct the vibrations against it from some distance away from it.

Avalanche is himself invulnerable to the effects of generating these intense vibratory waves. However, if the vibrations were to be reflected back upon him, he would be injured by it. As yet there is no known limit to the amount of area upon which Avalanche can use his powers at one time. However, there is no evidence that he could create an earthquake capable of destroying an entire city. Though he has managed to create large enough waves to cause great damage to city as big as Paris.

Avalanche has the strength of a human male of his height, weight, build and age who participates in intensive, regular exercise, and is strong enough to press at least his own body weight.

Retrieved from "https://marvelcomicsfanon.fandom.com/wiki/Dominikos_Petrakis_(Earth-1010)?oldid=163781"
Community content is available under CC-BY-SA unless otherwise noted.