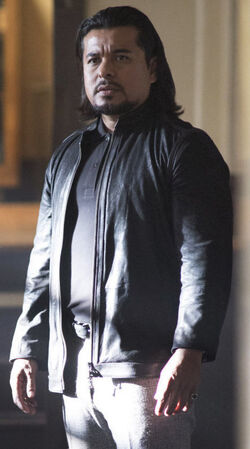 Domingo Colon was a mobster working in Harlem. Domingo Colon joined Cottonmouth and Mariah Dillard at Harlem's Paradise to talk about a newly formed partnership. In Colon his eyes the partnership meant that he would give Dillard money in exchange for a "Get out of jail free card". Dillard immediatly corrected him, saying she does make those kind of deals, warning the other two to not celebrate to early and that they should not be seen together. Colon watched one while Dillard and Stokes discussed the situation. Colon and Stokes then talked about the weapon deal that was going on that night, in which Stokes was supposed to sell ten crates of Hammer Industries weapons, supplied by Diamondback, in exchange for one million dollars. Colon left the club before the news of the ruined weapon trade reached it.

Retrieved from "https://marvelcomicsfanon.fandom.com/wiki/Domingo_Colon_(Earth-1010)?oldid=190314"
Community content is available under CC-BY-SA unless otherwise noted.