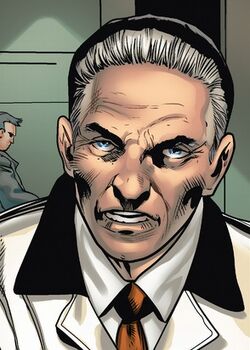 Following the death of Daniel Whitehall, the head of Hydra's activities in his part of the world, Dr. List was sent to the United States to meet with the four ranking Hydra operatives in the region on behalf of Baron von Strucker. With Whitehall's chosen successor, Sunil Bakshi, missing, he proposed a competition between the four of them - whichever one could bring S.H.I.E.L.D. out of hiding would get take over Daniel Whitehall's position. In the meantime, he would investigate whether Whitehall's obsession with arcane artifacts would benefit Hydra.

Soon after List left Octavian Bloom's estate, Bakshi had escape S.H.I.E.L.D. custody and made his way to Bloom, voicing his suspicions one or more of the higher ups wanted him dead. The two then contacted List, who assured them that he and von Strucker were not involved in a conspiracy and stated that they can't afford infighting during a transition. Therefore, he gave the order to have the Baroness, the Banker and the Sheik assassinated. However, this was all a S.H.I.E.L.D. ploy to trick Hydra into slaughtering each other. S.H.I.E.L.D. operatives Lance Hunter and Bobbi Morse then invaded Bloom's estate and killed him and handed Bakshi off to the US military.

List later began to track down spikes in quantum entanglement, suspecting a superhuman teleporter to be at work. His search led him all over the world, one of his victims being an inactive Inhuman named Ethan.

List was later approached by Bakshi, accompanied by Deathlok and became suspicious of how he escaped the massacre of Hydra leaders. Bakshi smoothly talked his way out of trouble by insinuating that List may have ordered the hit himself since he had acquired more power in Hydra. Bakshi then inquired as to List's interests in superhumans and recommended upgrading their brainwashing techniques.

List then received another appearance of the teleporter in Milwaukee, Wisconsin and sent Bakshi, Deathlok and a Hydra squad to investigate.

Retrieved from "https://marvelcomicsfanon.fandom.com/wiki/Doctor_List_(Earth-1010)?oldid=164685"
Community content is available under CC-BY-SA unless otherwise noted.