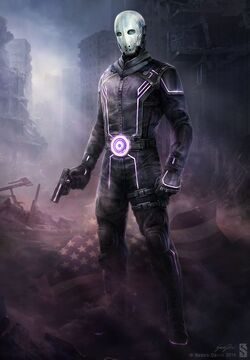 The half-brother of Kraven the Hunter, Dmitri has always been much more of a subtle hunter. His expertise in spy craft and mimicry made him the perfect candidate to become a mercenary, and was eventually enlisted by the secret terrorist organization Hydra.

Dubbed the Chameleon, he began infiltrating high level targets such as S.H.I.E.L.D., Project: Pegasus, and even the White House. That is why when he was stationed to infiltrate the newspaper organization the Daily Bugle, he was slightly taken aback.

However, it soon became clear that his cover as the editor-in-chief, J. Jonah Jameson, was to acquire information about NASA through his astronaut son, as an interview was being conducted that day. However, the Chameleon was unaware that one of the Bugle’s employees, Peter Parker, was secretly the vigilante Spider-Man.

Spider-Man caught onto the Chameleon’s ruse and put a stop to his plans. Enraged, the Chameleon fled and began bargaining with Hydra to continue going on missions to take out Spider-Man. This would result in him infiltrating Oscorp as both Norman and Harry Osborn in order to acquire the secrets behind Spider-Man’s powers.

When that proved unsuccessful, Chameleon took a more hands on approach and started posing as Spider-Man to commit robberies in an attempt to turn public opinion against him. But even this failed, as Spider-Man was able to clear his name. The Chameleon has avoided capture, but remains determined to one day best his enemy.

Retrieved from "https://marvelcomicsfanon.fandom.com/wiki/Dmitri_Kravinoff_(Earth-101)?oldid=250542"
Community content is available under CC-BY-SA unless otherwise noted.