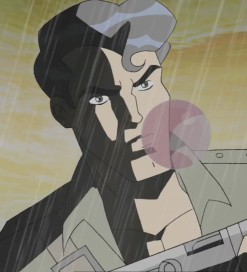 Although born in Italy, "Dino Manelli" immigrated to America with his parents. His good looks and singing talent led to a career in the movies. He played Wyatt Earp and a baseball player, among other roles. During this period he also appeared in nightclubs with Jerry Larkin, a comedian. He was about to star as Dracula in an Alfred Hitchcock film. He had everything.

After Pearl Harbor, though, he gave it all up. He changed his name, joined the army, and eventually became a founding member of the Howling Commandos. After training, the unit was dispatched back behind enemy lines in France to recover Free French resistance fighter who was captured by Nazi soldiers. This was a vital rescue mission since they knew the date and time of an impending Allied landing on the beaches of Normandy. With the help of Free French resistance fighters they rescued the man from the Nazis before he could be forced to talk. Because he was the only Howler fluent in German and Italian, he often had to impersonate enemy soldiers. In one case, he pretended to defect, guessing that his movie fame would make the Germans less careful in talking to him. Once in German hands, Manelli learned how to find a V-1 launcher, which had been the goal all along. Manelli escaped and reported the information, but he was almost executed by the Allied army for his apparent treason. Manelli's fame caused a problem when a group of young Dutch women recognized him, but he charmed them into helping the commandos complete their mission. During a furlough back home, Manelli arranged for the other Howlers to meet Bing Crosby, Jimmy Durante, Bob Hope, and Groucho Marx.

Manelli, like the other Howlers, depended as much on attitude and luck to complete a mission as on training and planning. He served with the squad throughout the war, with two exceptions. During a skydiving exercise, Manelli's parachute jammed and while he managed to get it open, he was so close to the ground that, although he survived, one of his legs nearly shattered. During this period he helped make training films, and he fell in love with Nina Bergson, who supervised their production. Unbeknownst to Manelli, she was a Nazi spy, and she died during an attempt on Winston Churchill's life. Manelli's other break from the Howlers was a brief assignment to a squad called the Deadly Dozen.

After the war, Manelli continued his film career, then moved to television ("The Dino Manelli Show"), and finally headlined at a casino in Las Vegas. He attended several reunions of the Howling Commandos. He later assisted S.H.I.E.L.D..

Manelli, like all Howlers was trained to be a top-notch soldier, capable with various military weaponry and a very good hand-to-hand combatant.

Retrieved from "https://marvelcomicsfanon.fandom.com/wiki/Dino_Manelli_(Earth-1010)?oldid=183290"
Community content is available under CC-BY-SA unless otherwise noted.