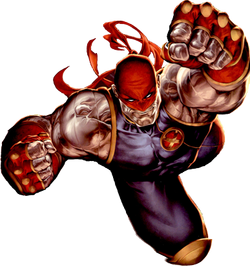 Single
Occupation
Adventurer, X-Man, student, artist, technician
Education
High school dropout, extended education after the formation of the X-Mansion and the X-Men via Magneto
Origin
Origin
A teenage Mutant from Russia who possesses the power to transform his body into a form of metal at the age of 5.
Creators

I was an outcast, even before discovering my powers. When I discovered my powers, I felt that the world stopped. I felt empty. Until Erik came, and gave me hope. Now, I believe that my powers can be used for good, and I'm not one of a kind. I'm a Mutant, and I'm proud.

Much of Dimitri's past was unknown. However, he was known to arrive in the United States when his parents went there to recover themselves from financial problems. Dimitri was said to be the only child his parents had (although there were some indications that he actually got a sibling). His parents rejoiced at Dimitri's birth. However, unknown to them, like what Arnim Zola said, every human got a hidden "power gene" that can be triggered through great stress/pain. Dimitri was something of what Arnim Zola said. However, he's different. The gene he carried was different, and he was categorized as a "Mutant". And as any Mutants, their genetic powers will appear at random times. In Dimitri's case, when he's 5 years old. While Dimitri was still a baby, his Mutant powers didn't surface. But, at the age of 5, suddenly, the "X-Gene" triggered, at night, when he was crying of "great pain", and when his parents found him, his whole skin was metal. Dimitri was kept secret by his parents, of his powers, and it partially succeeded.

However, Dimitri's powers were discovered when he's 16 years old, in high-school, where suddenly his powers "triggered" unexpectedly when he tried to defend his friend from bullies. That time, he didn't know that it's not a "random power trigger", but the fact that he hasn't controlled his powers quite well yet. With this, the school's principal panicked, and that his theory of "unregulated super-powered beings" roaming around the world (the Avengers are an example of "regulated superhumans"). Stryker quickly expelled Dimitri, and it left Dimitri hopeless. On the other hand, Stryker, using his former genius mind, worked with "an old friend" (Arnim Zola) to decipher what exactly Dimitri is. Because of this, Dimitri was indirectly responsible for the formation of the Sentinels.

Dimitri however, was unexpectedly filled with hope after a man approached him. This man would later be identified as Erik Lehnsherr (Magneto), a fellow but older Mutant. He offered him a place in his "school", where people like him can train their powers. Erik however, was actually "mad" that time, becoming stressed out that he said that "the first guy he found that time was called a Mutant". Fortunately, he was right, and Dimitri was the first person Erik met that day. At first, Dimitri seems startled, and Erik's still mad. However, when Erik saw what Dimitri can do, he became surprised, and recruited him to his school. Dimitri became the first Mutant Magneto recruited into the school, followed by others. Initially, Dimitri's recruitment was followed by "Wasp", then "Whirlwind". But then, other Mutants followed, and were taught how to control their powers, and provided with general schooling by Magneto himself in general subjects. Eventually, Magneto then formed the X-Men, consisting of Dimitri, as well as a "Mutant Justice Team". Dimitri was then codenamed "Colossus".

Dimitri's an accomplished combatant, utilizing street fighting and several martial arts to make a full use of his superhuman strength. He's also an accomplished and competent technician, seemingly being able to fix the X-Men's transport, the X-Jet with expertise.

Colossus has a strength range between 50-75 tons.

While Dimitri was nigh-unstoppable, physically, in his metal form, if he does not wear his uniform, or in metal form, he will not possess superhuman physical attributes, leaving him vulnerable. His skin, while very durable, is also actually able to be "shattered". Colossus can "heal" the shattered metal skin, but it might take some time.

Transportation: The X-Jet.
Weapons: None known.

Colossus was 17 years old by the time he joined the X-Men.

Retrieved from "https://marvelcomicsfanon.fandom.com/wiki/Dimitri_Rasputin_(Earth-4045)?oldid=231113"
Community content is available under CC-BY-SA unless otherwise noted.