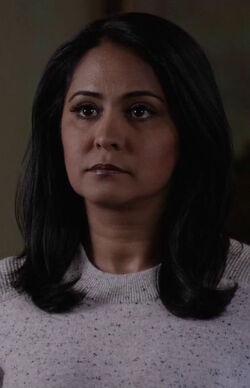 You and I were both there when the Chitauri killed mom, aliens invading our world. Everything changed that day.

Devi Deol grew up at the Deol Residence built by her father in India, where she and her brother, Dinesh Deol, would play together, with Dinesh once breaking his arm on a zip line. While living in New York City, Devi Deol and her brother witnessed their own mother being killed by the Chitauri during her own birthday celebrations. Both Devi and Dinesh survived the attack, although this only began Devi's hatred for alien beings, blaming them for the death of her mother and fearing their kind returning.

In the wake of the Inhuman Outbreak, Devi Deol began to view the emerging Inhumans as a threat to humanity, comparing them to the Chitauri who had killed her mother and thus affiliated herself with the anti-Inhuman organization, the Watchdogs while still presenting herself as a politician with a strong humans-first stance. She also had a deal with her brother that if either of them became an Inhuman, the other would kill them.

S.H.I.E.L.D. was a puppet of HYDRA, and now they'll be puppets of the Inhumans.

During the Blackout Attack, which her Watchdogs allies caused in order to discredit the Inhumans, she took the opportunity to address the event on television by doing an interview with WHiH World News, and to turn the public opinion against the Inhumans even further. During the interview Deol pushed her view that the Inhumans were dangerous weapons that were now a threat to mankind and claimed that if the regular humans didn't stand up and fight back against the Inhumans, the humans risked their own extinction.

Much to Deol's annoyance however, S.H.I.E.L.D. operatives had managed to find new evidence that it was the Watchdogs who had caused the blackouts with EMP-devices, successfully defeating them and returning power to Miami and Washington, D.C.. Refusing to give up on her mission, Deol claimed on WHIH World News that she still believed the Inhumans were to blame and that S.H.I.E.L.D could not be trusted, because the terrorist organization HYDRA had once infiltrated them before during the HYDRA Uprising and they would now be infiltrated by dangerous Inhuman terrorists.

During a visit to Dinesh Deol's home and while watching her own interview, Deol was contacted by the Superior who informed her that before S.H.I.E.L.D. had turned the power back on they managed to kill 17 Inhumans during the chaos caused by the blackouts. She complimented the efforts, and requested that they call her again later, in order to give her more details. As she departed her brother's home, she told Dinesh, still undergoing Terrigenesis and locked in his cocoon, that she would leave the TV on, in order to entertain him before she walked out of the house to continue her work.

The Inhuman Epidemic was the next phase, the aliens are now here, contaminating us, changing us to be like them, which is why we made each other a promise, that if either of us was ever infected by the alien plague, it was up to the other to do the right thing.

With Dinesh Deol having finally been freed from his Terrigenesis cocoon, Deol brought him to the Deol Residence to recover. Dinesh awoke and joined his sister in the garden. She invited him on a helicopter ride. Following a brief talk of their family and the Battle of New York, Deol asked her brother about his time inside the cocoon and what he remembered, although Dinesh could only recall darkness and hearing his beloved sister's voice telling him to continue fighting through it all. Deol told him to look at her before apologizing yet again to him. Without another word, Deol fired a single shot into Dinesh's stomach and watched him die, as his lifeless body fell onto her. Pushing Dinesh's body off her, it fell to the water where he started to undergo a Secondary Terrigenesis.

Senator Deol was approached by Nitro, also a member of the Watchdogs, in her office. He theorized that since Dinesh was an Inhuman, Devi should be too, and threatened with exposing her to the Terrigen Mists. After the "mutant" smashed the Crystal, it was revealed that Devi was not an Inhuman. She made fun of the man, revealing to him that she knew he was really an Inhuman, and not a mutant as he claimed to be. Enraged, Nitro blew himself up, killing her.

Retrieved from "https://marvelcomicsfanon.fandom.com/wiki/Devi_Deol_(Earth-1010)?oldid=191665"
Community content is available under CC-BY-SA unless otherwise noted.