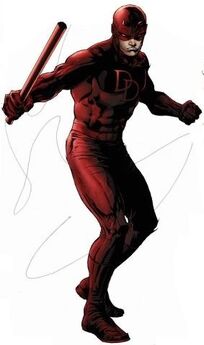 Derrick's parents were killed in a car crash on their way to pick him up from his uncle's a week after he was born. Derrick was then moved to live with his uncle, who was later killed in an accident at his place of work. Derrick was then sent to a orphanage. When Derrick was 12, he was helping cook, but the oil spilled into his left eye, blinding it. Derrick's orphanage won 10,000 dollars when some of the faculty and orphans competed in a quiz for charity, though a lot of the money did go to actual charities. The orphanage was then robbed, but the robbers held them hostage and prepared to kill a faculty member if he didn't give him the code to the safe. The man didn't talk and was about to be shot, but Derrick intervened and grabbed the gun. The gunman pulled out a knife and attacked Derrick before stabbing him in his leg, but Derrick knocked him out and freed the faculty member before collapsing.

An Eye for a Eye

Derrick awoke in a hospital bed alone, he called for help and some nurses arrived, Derrick discovered he could see in both eyes and was told that the oil wasn't permanent. Derrick was walking home with a faculty from the orphanage when a tank of biotoxin drove past but burst. A majority of the toxin fell upon the faculty member, and a bit on Derrick.

Derrick woke up in hospital again but fully blind, he stumbled to his feat but started seeing vibrations, Derrick started wondering around until he was caught by Doctors and told what happened. Derrick then spent most of his life coping with his new power.

Derrick had his good friend Matt Murdock make him a red spandex suit.

Equipment: Daredevil has used four costumes in the course of his career as a crimefighter: his original yellow-and-black costume, his modern red costume, a black-and-red armored costume that was used temporarily, and a newer black-and-red costume which was used during the Shadowland saga. When Murray experienced a psychological break, each of his first three costumes came to be focuses for three distinct separate, distinct personalities within Murray. Since that time, Murray has resolved his psychological problems, and now exclusively uses the red costume. The horns on his costume are antennae that can pick up radiowaves, allowing them to serve as a police scanner. While possessed by The Beast the horns on his costume were transformed into larger devil horns when it fully awakened, and were reverted back to normal when The Beast was removed from Derrick Murray's body.
Transportation: Daredevil usually travels by foot across city rooftops through the art of parkour (the art of movement), and by the grappling hook and cable in his billy club.
Weapons: Derrick currently wields a multi-purpose cane that has many different modes. Its initial form is two short sticks held together by an extendable cable. It can be configured into a nunchaku- like weapon to a manrikigusari(a long rope/chain weapon with two weights on its ends), dual short sticks which can be wielded in a pair, staff, or a cable with a grappling hook. The weapon can also be adjusted to combine both sticks into a larger stick. The weapon is held by a holster on the side of Matt's left leg.

Retrieved from "https://marvelcomicsfanon.fandom.com/wiki/Derrick_Murray_(New_52)?oldid=231112"
Community content is available under CC-BY-SA unless otherwise noted.