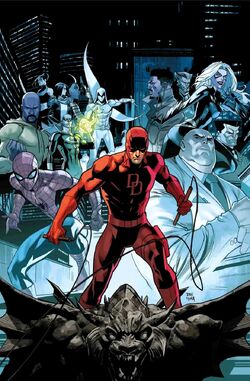 The Defenders were a team of street-based vigilantes and superheroes that was founded by Daredevil, Black Cat, Spider-Man, Power Man, Iron Fist, and Jewel, in order to help protect the streets of New York City from the hands of the New York's most dangerous threats, from the Criminal Empire of the Kingpin, to the mystical crusades that was led by the countless factions of the mysterious cult, known as the Hand.

Even before the Avengers came into rise, they were New York's finest street team until eventually, they became fugitives and were frequently being hunted by S.H.I.E.L.D. themselves, believing that vigilantes are still outlaws and may be considered a threat since they don't have the governmental authority to do such tasks in the community. They somehow gained recognition among several communities in New York, but eventually, due to unknown reasons, the team went into a momentary hiatus and each, every member of the team went off, into solo heroics.

They eventually managed to reform, and have come to help the Avengers and S.H.I.E.L.D. defeat Loki and the Chitauri Army, despite their situation against the lawful authorities. After the invasion, several members of the group, including a founding member of the group, left the team for various reasons. It was later revealed that one of the members who left the Defenders joined the Avengers, much to their surprise. They were proud for him, but some were still disappointed for him joining the other, "more significant," heroic team.

Rise of the Hand

A few years later, the ancient organization known as the Hand made their move by using the last known samples of the resurrection substance to bring back the recently-deceased Elektra and a few more individuals, in order to serve the Hand as their new "Black Sky." In order to find more of this mysterious substance, the five "fingers" of the Hand had gathered once more in New York City and tried to catch the Iron Fist so he would open the gates for the substance. However, the Defenders had arrived at the scene, just in time, in order to stop them from chaotically destroying the city, in the process.

As the Hand reached for the substance, Elektra unexpectedly betrayed the Hand for her own purposes, only to lead them for their doom, when the Defenders successfully buried the rest of the leaders underground. The Defenders, with the help of Elektra were successful once more in their heroic objective, saving New York once again from ashes, and the Hand was seemingly dismantled. However, unknown to these heroes, the remaining superiors of the Hand survived the crumbling collapse caused by the Defenders, and even managed to collect some of the immortal-giving substance to continue starting over again, to rebuild a better Hand, under the influence and guidance of their returning ancient founder, Gorgon.

After the invasion and the fall of the Hand, many people believed, loved, and finally supported the Defenders' heroic acts for defending the many boroughs of New York, but most were not amused, including S.H.I.E.L.D., and still believed that they should be hunted down by any means necessary, since they don't have the authority to take the law into their own hands and just do whatever they want on their own, without any rightful authority.

Because of that, the U.S. Government ordered S.H.I.E.L.D. to assign the Avengers to finally hunt, track and take down the Defenders. Although he is now an Avenger, Spider-Man still resisted fighting his old team and insisted S.H.I.E.L.D. just let them be, but he had no choice and still continued their mission.

At first, the Avengers tried to talk the Defenders down and tried convincing them to stop because what they are doing is unlawful, but the Defenders still refused and resisted arrest, with Daredevil even making a point, replying that it isn't unlawful to do what is morally right. The argument between the two teams went on, until it eventually led into them battling each other after the Avengers had no choice but to arrest them under S.H.I.E.L.D.'s command. The fight lasted for hours, until they were defeated, and were taken into custody in the Triskelion.

They remained imprisoned under the custody of S.H.I.E.L.D. until a group of powerful super-soldiered criminals known as the Wrecking Crew and the international science-terrorists who hired them known as A.I.M. started ravaging and causing destruction and chaos in the city during a small war against it's rival organization, the corrupted and the mysterious Roxxon Corporation. The Avengers immediately rushed into the scene, confronted, tried to apprehended all of the attackers and stop the war, but were defeated due to their sheer strength in numbers after both rival organizations unwillingly teamed up against the Earth's Mightiest Heroes, before battling each other once again.

The Defenders were finally been given a chance and were released to help the Avengers defeat the following criminals, after a pleading and emphatic Spider-Man managed to successfully convince director Nick Fury that they've done nothing wrong, and still believes that what they are doing is right, no matter what, despite the absence of the law's supervision and authority. They will keep on fighting for New York, because it is what's important to them and that is to do what is right.

In the end, they were successful in defeating and apprehending the members of the Wrecking Crew and some several members of both A.I.M. and Roxxon Corporation. From that point on, S.H.I.E.L.D. and the U.S. government have allowed the Defenders to do their job again as a team, protecting the streets of New York from dangerous criminals the Avengers alone can't even defeat, and sometimes even working alongside the Avengers when they needed to help them.

Retrieved from "https://marvelcomicsfanon.fandom.com/wiki/Defenders_(Earth-61615)?oldid=239191"
Community content is available under CC-BY-SA unless otherwise noted.