Start a Wiki
"Deep Research" is the sixth episode of Assemble!.

-Agent Coulson – Nick Fury said through the S.H.I.E.L.D. intercom. –Send Thor to Culver University in Virginia. We need to get information about Enchantress’ teleportation and we can get that from Dr. Selvig and Ms Foster. –

-Colonel, - Coulson replied. – I think sending Ms Potts with Thor would be a good idea. You know how the Asgardian doesn’t relate too well with humans. –

-Good idea, Philip – Fury replied. –So call in Ms Potts too, hopefully she will be in. Also, I would like to have General Ross’ daughter, Elizabeth brought to the Helicarrier. I want to check if the medicine Dr. Banner gave Agent Roger is suitable. –

-We would like to see Dr. Selvig, Ms Foster and Dr. Ross – Virginia “Pepper” Potts said to the receptionist at the University.

-Hmmm… Dr. Selvig is in the laboratory, along with Ms. Foster and Ms. Lewis. Dr. Ross is actually at her break. – the receptionist replied, checking the computer and then looking back up at Pepper and the tall, built blond man next to her.

-Thank you very much, - Virginia smiled and told Thor to walk along with her. – You already know Erik, Jane and Darcy, that’s why the most suitable option is you going to talk to them. I will talk to Betty Ross; we don’t know each other but… Uhm, I’m actually from this world and I can talk politely to people. –

-Sounds logical, - Thor nodded. –Now where is the laboratory? –

Pepper handed the Asgardian a small interactive, virtual map of the University.

-We are here, - Pepper pointed at the two green dots that appeared on the map. –The lab is marked with the Asgard symbol. I thought it would be better for you to recognize it. –

-Now you have to take this dot here, - Potts showed him – to the Asgard symbol over here. Is that clear? –

-Call me Pepper. Everyone does – she chuckled softly. –Once you reach there you will find Dr. Selvig, Jane and Darcy. –

-And then I ask them about Amora’s teleporting? – Thor checked the plan.

-More than your magic – she laughed and smiled. –Now if you need help, use the SHIELD intercom and I’ll go find you. –

-Thank you – Thor said and they split ways.

Thor quickly reached the lab, with the help of the map Pepper had made.

-Thor! – Jane Foster shouted and jumped into the Asgardian’s arms.

-Thor – Erik Selvig exclaimed and stood up, walking to him.

-Are we all gonna yell “Thor”? – Darcy smirked from her desk.

-I’m here from SHIELD – Thor said. – I need you to help me read Amora’s teleporting. –

-Well, I will need to set the equipment back in Puente Antiguo up – Dr. Selvig said.

-After last time? – Darcy chuckled. –Did you forget how stressed you were over them stealing your stuff? –

-Darcy, I’m serious, if we could talk to Coulson… - she was going to add something when the wall was brought down by The Destroyer Armor.

Meanwhile, at the cafeteria…

-So S.H.I.E.L.D. wants me to go check if Bruce is doing his work correctly? – Betty Ross asked Pepper.

-Understandable, specially coming from Fury. – Ross scratched her head. –I will gladly go to the Helicarrier to help you all out. –

-Excellent, - Pepper smiled at herself.

-So you say Bruce is actually in control of Hulk? –

-Apparently, even more if he sees you. – Pepper winked and stood up. –I need to check on an Asgardian, SHIELD sends us some strange tasks sometimes. –

-Neither do I – Betty shrug. –I guess we just help by doing this. –

Both women ran to the lab, where Thor was fighting the Destroyer.

-You all, go to a safe spot, I will take care of this. – Thor said and threw the Mjolnir at the Armor.

The Armor counter attacked, throwing flames at Thor. The Asgardian electrically charged the Mjolnir and blasted a lightning at the Armor, making it shut down. Picking the Armor up, he flew up in the sky and tossed the Armor the farthest he could.

As he came back down, Jane, Pepper, Betty, Erik and Darcy were already back in the lab, trying to talk to Thor.

-I do not know. – Thor replied. –But we need to find the other Avengers first, so Enchantress’ teleporting is more important right now. –

-Phil, - Pepper contacted Agent Coulson through the intercom. – We had a little encounter with the Destroyer Armor here in Virginia, but we are all fine. Jane says she needs her equipment to read the signals, or if you could lend her some of yours. –

-We will talk about that later on… - Coulson replied. –What about Betty? –

-She agreed to help at the Helicarrier – Potts smiled.

-You aren’t inviting me cause of the cellist? – Pepper laughed. – I’m playing; I have a lot of work back in New York. You are lucky Tony is missing too and that I like you SHIELD guys a lot. –

-That’s why you’re the best – Agent Coulson laughed. –Coulson out. – 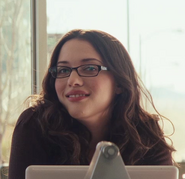 Thor throwing the Mjolnir at The Destroyer

Retrieved from "https://marvelcomicsfanon.fandom.com/wiki/Deep_Research_(A!)?oldid=56858"
Community content is available under CC-BY-SA unless otherwise noted.