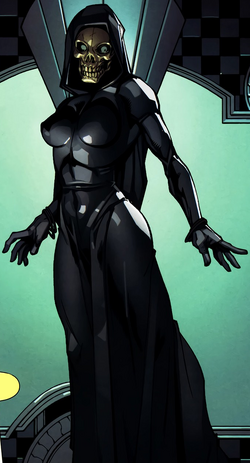 Earth-1010
Base Of Operations
Realm of Death, Overspace
Characteristics
Gender

Death was "born" along with the universe itself and the other cosmic entities associated with it. Whereas Eternity embodies life and growth, Death embodies decay and destruction. As she is a fundamental force, she has no true physical form, but can manifest in such a form as to interact with physical entities. Although she usually appears as a human or human skeleton, presumably it appears to other species in their own forms. Death rarely speaks aloud; its presence alone can usually convey its message.

Death makes its home in the Realm of Death, a dimension normally inaccessible to the living. Death's undead servants there are called minions. The Infinity Well there can answer any question, possibly by giving access to the accumulated wisdom of the dead.

Mortal beings have always strove to make sense of and control their surroundings. This tendency leads to anthropomorphism, the assignment of mortal motivations to impersonal processes or forces. Personifying these forces creates the expectation that communication with them, and thus influence over them, is possible. Traditionally, ordinary mortals have little or no success in swaying Death once it selects a victim.

The most familiar manifestation of Death is as Mistress Death, a young woman in a dark hooded robe. In this guise, Thanos, the mad Titan, fell in love with her. He wooed her by presenting her with as many souls as he could collect, which to him necessitated the extinction of entire species and planets. Mistress Death apparently approved of Thanos's behavior, because she resurrected him more than once, although she chose not to speak to him directly.

This same Mistress Death formed an attachment to Deadpool, whose curse is to be unable to die. These star-crossed lovers can therefore never be together.

Retrieved from "https://marvelcomicsfanon.fandom.com/wiki/Death_(Earth-1010)?oldid=167017"
Community content is available under CC-BY-SA unless otherwise noted.