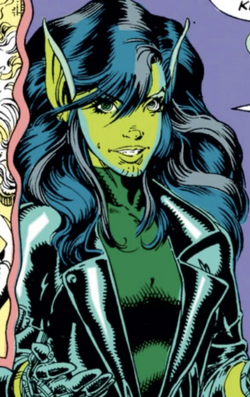 This is wrong... these are good people.

De'Lila was a very highly trained spy for the Skrull Empire. After the initial infiltration into the Fantastic Four that left Commander Kl'rt without a team, De'Lila was later sent in under the guise of Alicia Masters to get closer to them.

While under cover as Alicia, De'Lila became genuinely close with the Human Torch. She came to feel for him so strongly that she revealed the truth about being a Skrull, and tried to convince the Fantastic Four that she could help them.

However, Mister Fantastic did not believe her and she was detained in the Baxter Building, and the Thing was enraged, demanding to know where the real Alicia was. De'Lila promised him that she was safe, and that she was being held in a commandeered S.H.I.E.L.D. base that was being run by Skrulls. The Fantastic Four proceeded to raid the base and rescued Alicia, but in the process alerted the Skrull Empire of her betrayal.

Kl'rt, having been transformed into the Super-Skrull, was deployed to eliminate her. The Fantastic Four fought him off, and De'Lila used the Invisible Woman's DNA sequence to escape from her cell and attempt to escape. However, the Super-Skrull was able to catch up to her before she could escape from the Baxter Building. He ended up wrapping his arms around her before beginning to crush her insides. As the Human Torch begged the Super-Skrull to let her live, he merely grinned and igniting himself in flames, burning De'Lila to death as she reached out for Johnny.

[[Category: In a Relationship with Johnny Storm Characters]]

Retrieved from "https://marvelcomicsfanon.fandom.com/wiki/De%27Lila_(Earth-101)?oldid=262769"
Community content is available under CC-BY-SA unless otherwise noted.